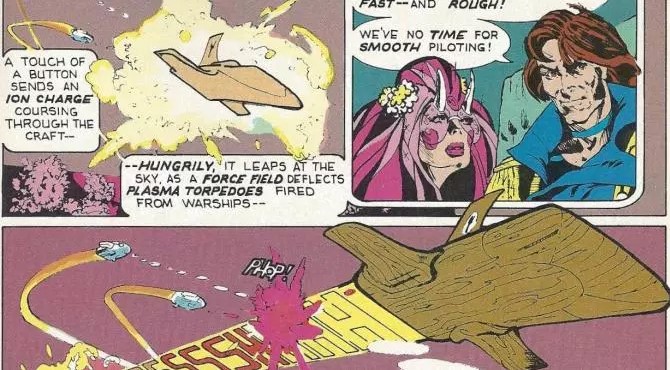 Before STAR WARS, there was Howard Chaykin’s IRONWOLF

Curious about the comic that inspired Lucas to request Chaykin for the Star Wars adaptation, Nothing But Comics takes a look at the Ironwolf strip presented in DC Comics’ Weird Worlds #8-#10.

Launched in 1972 and edited by Denny O’Neil, the Weird Worlds comics anthology series initially showcased licensed characters created by Edgar Rice Burroughs, such as  John Carter of Mars, Korak, and David Innes, and featured work from such creators as Marv Wolfman, Len Wein, and Michael Kaluta. Beginning with issue 8 (cover dated December 1973), the strips featuring Burroughs’ characters were replaced with a new science fiction strip — plotted and illustrated by Chaykin, with scripting by O’Neil, lettering by Walt Simonson, and coloring by Liz Berube — starring the eponymous protagonist, Ironwolf

The feature opens at some unspecified point in the future, with a full-page depiction of an enraged Lord Ironwolf defying the orders of his empress, Erika Klein-Hernandez, leader of the interstellar, Earth-based Empire Galaktika. The Empress wants Ironwolf to turn over a supply of the anti-gravity trees from his homeworld, the planet Illium, to her brutish alien allies. The trees’ unique gravity-negating wood is used to make the Empire’s spaceships; in exchange for the anti-gravity trees, the Empress expects the aliens to help the Empire in a “coming war.”

Ironwolf believes that giving a supply of the anti-gravity wood to the aliens would throw away the Empire’s greatest defense against them. He feels the Empress is wrong to trust the aliens, and refuses to surrender the trees.

Things get violent quickly, with Ironwolf slapping the Empress hard on the face; her alien guests come to her defense, and swords are unsheathed and laser pistols drawn. Ironwolf fights valiantly, but is overwhelmed; fortunately, a female entertainer in the Empress’ palace arrives and aids the rebel lord. The two flee the palace for the safety of Ironwolf’s spaceship, the Limerick Rake, and leave Earth.

Ironwolf and his crew become space pirates, stealing from the Empress and the Empire’s nobility. The Empress responds by dispatching Lord Omikel to stop Ironwolf. Omikel is the leader of the Empire’s Blood Legion, a race of vampires created by “a hideous accident of evolution” — although these words suggest a scientific explanation for the presence of vampires in a science fiction space opera, the vampires appear to have the same powers and limitations as mythic vampires (e.g., they consume blood, can only be killed by sunlight or a wooden stake through the heart, etc.)

In the span of three comics issues, Ironwolf survives various assassination attempts, even one by his craven brother, Tyrone, who betrays Ironwolf to Omikel; destroys his planet’s anti-gravity forests; meets the sexy rebel, Shebaba O’Neal, who recruits the pirate into serving the outer galaxy rebel government, which is fighting the Empress in an effort to establish a democracy; poses as the lead actor in a royal production of William Shakespeare’s Hamlet in an unsuccessful effort to assassinate the Empress; and discovers monstrous corruption in the ranks of his rebel allies.

Chaykin creates a brisk, action-packed strip with interesting ideas and plot threads, but the narrative suffers from the constraint of having to pack the creator’s ambitious vision for a grand space opera into a limited number of comics pages. The attention given to character development and background is minimal, and the narrative is inconsistent.

For example, the real name of the female entertainer that rescues Ironwolf at the beginning of the strip is never revealed. Ironwolf refers to her as “little Miss” initially and as “Miss” and “Missy” in subsequent adventures. Her motivations for risking so much to help Ironwolf fight off the Empress’ alien allies are never explored with any depth.

Later, she dies trying to help Ironwolf with his unsuccessful assassination attempt on the Empress, and when Shebaba asks Ironwolf if they should take Missy’s body with them as they flee the palace, Ironwolf coldly says, “Do whatever you like, Shebaba! Just… don’t bother me!”

This unceremonious removal of Missy from the narrative suggests that Chaykin came up with a more interesting female companion (i.e., Shebaba) for Ironwolf mid-story, and, somewhat like the strip’s protagonist, couldn’t be bothered with Missy’s background or motivations.

The story also hints that the Empress is working with her alien allies to betray the Empire that she rules. It is unclear what form this betrayal will take, or what would motivate the autocratic Empress to share power with the aliens, other than their promised aid in an unspecified “coming war.” Perhaps this “coming war” is against the rebels, but that is pure speculation, as the story never clarifies the Empress’ plans. Readers see little of the aliens (the name of this alien race is never given in the story) after their debut in Weird Worlds #8, and the primary antagonists become Omikel and the Blood Legion.

Without evidence of the Empress’ alleged treason presented to readers, and with Ironwolf’s discovery in issue 10 that the rebels are corrupt, the moral justifications for the protagonist’s actions are weak. In the last issue, even Ironwolf acknowledges that there does not appear to be any moral justification for his actions: “I feel empty! I see no reason for continuing to struggle! I’ve nothing left to believe in!”

At the end of the series, Ironwolf rejects the authority of both the Empire and the rebellion, and goes back to piracy. Unlike the Star Wars franchise Chaykin would later render in the comics, the “Ironwolf” strip provides no clear dichotomy between “good” and “evil” political forces, and the disillusioned protagonist and his allies ultimately fight for their own sense of honor, rather than a cause.

With its use of swords and wooden spaceships, as well as its feudal politics and depictions of piracy, the strip mixes future science fiction concepts with antique elements to create a visually interesting space opera. The feature also blends fantasy elements, such as vampires, into the story. Perhaps this mixture of space opera with fantasy and swordplay caught Lucas’ attention and motivated his choice of Chaykin as the artist for the Star Wars adaptation.

But it also probable that Chaykin’s artwork alone prompted Lucas’ request that Chaykin illustrate Star Wars. Because while the narrative has flaws, the art is gorgeous. The characters, spaceships, and settings are of interesting design, and the action is depicted in a dynamic and engaging manner.

Chaykin illustrated the first ten issues of Marvel’s Star Wars comic, and would later write and illustrate other comics such as American Flagg! and The Shadow, becoming a renowned comics creator. Although the “Ironwolf” feature did not have a long run, due to the cancellation of Weird Worlds with issue 10, it is an interesting space opera comic showcasing the early work of a talented comics creator, and the strip led to the selection of Chaykin as the first Star Wars comics artist.