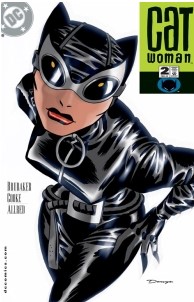 Over the course of the last several days, Nothing But Comics has been revisiting and evaluating the legacy of writer/artist Darwyn Cooke, who passed away on May 14th. When the staff was discussing which Cooke works we wished to discuss, I immediately volunteered for his Catwoman. I have written in the past about my fondness for the character and her fascinating evolution over the years. Cooke contributed to an important segment of Selina’s development, helping to create one of the greatest periods in her long and storied career.

When Cooke first started drawing Catwoman, the character was at a transitional junction. In 1993, she had received her first ongoing series, which enjoyed a long run before wrapping at #94 in 2001. DC was not giving up on Selina, though. Instead they brought in writer Ed Brubaker to revamp her. Brubaker and Cooke first teamed up for a four part backup tale in Detective Comics which established how Selina’s slate had been wiped clean. Recently returned to Gotham she had the freedom to refashion her life however she pleased. The newly relaunched Catwoman explored what Selina’s new status quo would be. Brubaker’s writing for the series is fantastic, knitting together different strands of the character to create a lively, engaging protagonist. He also naturally shifts her closer to the hero side of the ledger. It is great work, which remains a benchmark for Catwoman.

In addition, Brubaker’s scripts were well suited to the strengths of his collaborator. The protagonist of the Detective stories is Private Eye Slam Bradley, whose cragged features are expertly rendered by Cooke. Cooke’s cartoonish style proves to be good match for the character, highlighting his age, along with the stubborn brawn which got him this far in life. This is marvelously illustrated by the two pages which open the narrative. The first depicts a series of panels, each offering snapshot views of the scene. Glimpses of a pawn shop sign, hands reaching for baseball bats, a knowing smile all create a sense of events rapidly escalating. This sensation is confirmed by a splash page explosion of violence.

While the heroic optimism of New Frontier remains Cooke’s most iconic creation, he was equally at home in the dark shadows of noir. Which is not to say that Cooke neglects his sense of humor. The third chapter begins with the image of Slam hoisted upside-down, objects falling upwards from his pocket. There is some great detail work on this page, such as Slam’s lucky eight ball keychain (a nod to Daniel Clowes?). The most priceless, however, is Slam’s expression of bemusement, as if this type of stuff happens all the time. If this were a B-grade cop movie, our hero would take a moment ot mutter that he’s getting too old for this shit.

While Selina’s presence lingers throughout the Detective story, she herself only makes a brief appearance. Cooke’s gives her an entry though worthy of any of the great feme fatales. After a tough day on the case, including a scuffle with that Batman guy, Slam returns to his office to discover the object of his investigations perched on his desk. Her figure is accented by the shadows cast from the slants of Venetian blinds (Matt Hollingsworth provided the superb coloring for Cooke’s time with Catwoman). Selina’s pose radiates a well-earned confidence. She is enticing without being reduced to crude cheesecake. A cursory glance at the covers for her 90s series reveals how much of a departure this is. Jim Balent drew the character in full 90s excess, leaving the reader wondering if the artist had even the most basic grasp how female anatomy looked, let alone moved.

Cooke immediately tosses this all in the junk heap. His Selina has a slight build necessary for the gymnastic athletics of her trade. Her hair is cut to a more manageable length. In his notes on the character, Cooke suggests looking at Audrey Hepburn for inspiration. Indeed, Hepburn’s pixie-faced charm is clearly present in Cooke’s version of Selina. His Selina is utterly enchanting in a way that never undercuts her skill or determination. This is a woman that could easily win the favor of many a man, Gotham’s own Dark Knight being one of them.

Cooke carries these visual traits over to the new Catwoman ongoing. For Catwoman’s new costume, Brubaker requested something that was practical, while evoking Diane Rigg’s iconic cat suit from the 60s Avengers TV show. Cooke more than obliged giving Catwoman the black leather cat burglar outfit which she has worn ever since. It is easy to see how it became such a success: sleek and durable, it fits the character perfectly.  The new costume also gives Selina a fresh sense of identity, as she experiments with shedding her former criminal ways.

This theme of release and rebirth is channeled through the art. The newly attired Catwoman bounds across the rooftops of Gotham with a smile on her face. In one spectacular image she backflips with such ease that the reader cannot help but share in her sense of joy. It can only last so long; this is Gotham after all. Yet, Selina’s search for a mysterious hunter of prostitutes, does not destroy her newfound happiness. On the final page Cooke did for the series, Selina may be covered in shadows, but behind her burns the bright light of the sun. Life will always be a mix of the good and the bad, yet that cannot take away the satisfaction of doing your best to decrease the amount of bad. “You can’t argue with happiness, can you?” No, Cooke and Hollingsworth’s vibrant art replies, no you cannot.

Cooke departed Catwoman after issue #4, but he was not done with the character. The next year (2003) DC released an original graphic novel, Selina’s Big Score. Both written and illustrated by Cooke (with Hollingsworth returning for colors), it served as a prequel to the Brubaker collaboration. Selina Kyle’s death has been faked, while the Catwoman is presumed dead as well. Selina wishes to keep it this way, though, she has little intentions of staying out of trouble. The book opens with a fast paced chase across the roofs of Morocco. Cooke invests this sequence with his usual sense of dynamic action, as he alternates between tightly cropped close-ups and wide angle panoramas.

The heist is a bust, however, as Selina discovers she went through all that trouble for a fake. Dejected, she slinks back to Gotham in search of any possible scores. What she ends up with is a gangster’s moll, Chantel, looking for her own fresh start and bearing a scheme for achieving it. Chantel’s idea of robbing a mob transport train strikes Selina as foolhardy, yet, Chantel’s plight stirs memories of her own past of surviving by unsavory means. Cooke does a good job here of evoking Selina’s prostitution backstory without dwelling on the details. The emphasis is not on her former weakness but on her rebirth as something stronger. This motif becomes increasingly pertinent as Selina enlists a figure from her past, Stark, to help with planning a failsafe job.

As with any surefire job, however, things naturally go wrong. Narratively, speaking, Selina’s Big Score is a delicate balancing act of nourish suspense with Selina’s joy to be at work once again. Building on Brubaker’s character work, Cooke’s Selina cannot help but beam with delight after testing an experimental speedcar. This sense of excitement carries over to some of the supporting cast as well. Stark’s colleague Jeff is introduced at a Vegas craps table. In four panels, Cooke gradually reveals Jeff from the perspective of dice falling towards the table. Meanwhile in the background, people’s faces shift a little in each panel as they gage Jeff’s chances of success. He wins the roll with an enthusiastic declaration of “Super Chud!” Once again, Cooke’s distinctive style is perfect for expressing the lively, four-color nature of the scene.

As alluded to above, things fall apart pretty quickly once the team hits the train. Not everyone walks away alive. Still up to the end, Selina remains Selina. It should be noted that while Cooke may occasionally clothe Selina in visual cues borrowed from cinema’s film fatales, she herself never becomes one. The classic fatale is at best oblivious to, at worst scheming for, the deaths of her male suitors. Selina may have her flaws, but willful murder is not one of them. This aspect of her character was planted in one of her earliest Golden Age appearances when she refused to let The Joker murder Robin. In Selina’s Big Score, her hope all along is for the four participants to survive and share the loot. These good intentions only makes the melancholy of the final page more poignant. Selina cradles a dead body in her arms, as the getaway ship drifts. Selina’s hair masking her expression heightens the emotion of the scene. Selina has won the means to maintain her freedom, even if the cost has been way too high.

Together Brubaker and Cooke refashioned Catwoman for a new era. Brubaker’s run on the series is one of the brightest moments in the character’s history and Darwyn Cooke played a large part in its initial success. Cooke never returned to the character for a full story, but he did illustrate a variant cover for the series during DC’s Darwyn Cooke variant month. In a month full of glorious images, Cooke’s Catwoman (#37) was one of the best, as she leaps across the skyline with carefree glee. Her personality is reflected in her surroundings, turning a moonlight Gotham into a celebration of life. Later in the year, he produced what is likely his final published depiction of Catwoman. Done for DC’s Warner Brothers Looney Tunes variant series, his cover for Catwoman #46 depicts a bemused Catwoman holding a panicked Tweety Bird in her open palm. There is no dialogue yet the viewer instantly hears in their head that famous refrain “I tawt I taw a puddy tat.” Clever, charming and seemingly effortless this one picture sums up so well what was so special about Cooke. As such, it is also a poignant reminder of how much he will be missed.