This Week’s Finest: Kill or Be Killed #4

COMIC OF THE WEEK
706Views 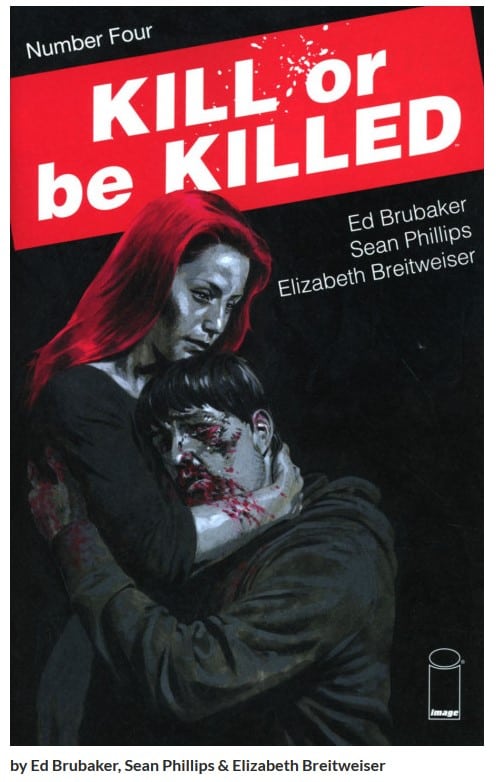 In only it’s fourth issue, Kill or Be Killed continues to be one of comics most outstanding series. Dark and moody with a strain of hyper realism contrasting with the books supernatural elements; Kill or Be Killed is Brubaker, Phillips & Breitweiser best Image Comic’s work yet.

Kill or Be Killed #4 closes out the books first arc by having the protagonist come to terms with his situation and accomplish the murder he’s been tasked with for his own survival but in doing so, it opens up a range of implications for the book going forward. Kill or Be Killed has sustained momentum partially by having multiple thematic tracks within the story coincide with one another. Issue #4 keeps with that trend but also add layers of questions and intrigue to the story. Not only does it follow through on it’s central premise, but moreover, it expands on the ramifications of the protagonist actions in a way that is surprising but also feel’s organic and honest to the series as a whole. Kill or Be Killed is driven from the perspective of it’s main character while establishing that on some level, his version of what’s happening isn’t always the most honest interpretation. Issue #4 raises even deeper questions about the nature of it’s own reality as it’s perceived by the reader. It opens by constructing a narrative fantasy for the protagonist that appears real and then closes by making a suggestion towards the possibility that maybe the entire premise is a delusion of the main character. But the beauty in that suggestion is that it is but one of multiple possibilities, all of which are pretty terrifying when extrapolated on. That series writer Ed Brubaker has written a character that is both clearly dangerous and mostly despicable based on his action’s but yet, entirely relatable, makes the possible implications of the final page, and the nature of Kill or Be Killed in and of itself, all the more frightening.
Artist Sean Phillips and colorist Elizabeth Breitweiser continue some of the most stunning visual narration of their careers in Kill or Be Killed #4. Over the summer, Brubaker dm’d the NBC twitter account about Cosmo’s write up of issue #2 and was pretty open to questions about the comic beyond his initial inquiries and one of the revelations for me in that conversation was in the reveal of Phillips decision to go full page with his illustrations for the series as opposed to the more traditional panel structure of their previous work and it’s benefited Kill or Be Killed greatly. While the art still follows the same three panel grid structure that’s been a hallmark of Brubaker & Phillips past collaborations, it feels far more open and expansive which opens up the storytelling in ways that are fresh and innovative. Phillips has always been a master in detail and letting his illustrations dictate the narrative pace and tone but the loosening up of the structure has provided for a far more expansive visual experience. There’s an element of lush beauty in Kill or Be Killed that is amplified by Phillips and Breitweiser’s stunning visual compositions. On colors, Elizabeth Breitweiser feels as if she’s taken a more free-form approach to the application of the comics pallet, giving the book a natural vibrancy. A lot of comics are set in New York City and often times, a superficial construct of the city is used as function of the narrative’s setting and that’s fine. Kill or Be Killed isn’t really using New York beyond that either, but it has a distinct feeling of authenticity that is engrossing and it’s chiefly Breitweiser’s color that achieve that in it’s contrast. Breitweiser captures it’s bright lights and grey infrastructure against the cities natural lighting and elements expertly. It’s equal parts dark and bright that allows for an endearing atmospheric quality that further distinguishes Kill or Be Killed in it’s excellence.

Kill or be Killed #4 is yet another installment that further exemplifies the evolution of Brubaker, Phillips & Breitweiser as leaders in the medium. It remains one of comics best series for it’s craft and originality. Not quite in the crime genre and not quite a horror book with a premise that could be psychological, supernatural or some combination of the two; Kill or Be Killed defies convention and expectations for a comics series that is never less then thrilling and always deeply absorbing. Issue #4 may not be the series best issue so far and in the grand scheme of things, what it’s hinting at will most likely be made far more explicit as the story progresses. Installments of greater consequence are surely in the books future. But Kill or Be Killed is so good on a fundamental level that each issue is it’s own singular experience; one that’s extremely dark but thoroughly satisfying in equal measure. In that sense, issue #4 isn’t all that different from it’s predecessors but that’s ultimately what set it’s part; it’s consistency in quality is unparalled and if the premise of this feature “This Week’s Finest Single Issue Comic” the only answer is Kill or Be Killed #4.