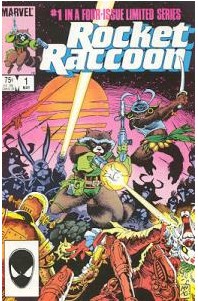 It has been a long, winding road for Rocket Raccoon. He has gone from inauspicious beginnings (a one-off supporting character in an obscure back-up feature) to being voiced by a two-time Oscar nominee in a big budget summer tent-pole movie. Along the way his past has been ret-conned twice, once by his co-creator Bill Mantlo. Currently, he stars in a team book, and a recently launched solo series, as well as makes regular guest appearances around the Marvel Universe. At last year’s New York Comic Con, one of the hottest promo items was a plush Rocket Raccoon toy. Not bad for a character whose total appearances over the first 30 years of his career could easily be counted on two hands.

It all started, as I said in rather unpromising circumstances. Writer Bill Mantlo was working on a serial for the magazine Marvel Preview. Entitled “The Sword in the Star”, it was a rather self-conscious retelling of The Odyssey in a science-fiction setting. The story began as a back-up in Preview #4 (ironically, the main feature of that issue was the debut of space adventurer Star-Lord). The second installment appeared in #7, dated summer of 1976. The narrative is, honestly, not one of Mantlo’s better efforts, though it does feature some nice Jack Kirby style art from Keith Giffen. In the second installment, Prince Wayfinder, the only survivor of Planet Ithacon, has landed on a strange world. Among the various odd life forms he discovers on Witchworld is a short, anthropomorphic, talking raccoon by the name of Rocky. The type of slang Rocky employed is suggestive of a middle-aged Englishman. This voice for Rocky is really odd, unless you take into account that Mantlo was consciously basing the character on The Beatles song “Rocky Raccoon.” Still, it’s pretty distracting, especially for those of us used to Rocket’s more contemporary manner of speaking.

The end of the chapter finds the prince and raccoon at the mercy of the witch Circe Kirke. An editorial comment reminds readers that “only your letters, and, mostly, your support can bring [the story] back . . .” It would seem that editorial received little of either. As far as my research has been able to uncover, there never was a third installment of “The Sword in the Star.” 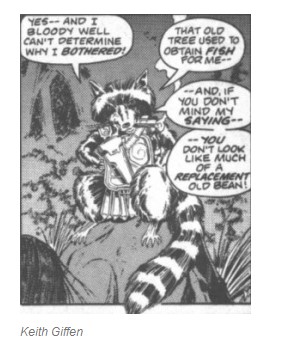 Time passed. In the early 80s, Mantlo was writing The Incredible Hulk, where he decided to bring Rocky back for an one issue appearance. It is in this issue, where Rocket Raccoon finds his true voice. Mantlo basically ret-cons out of existence “The Sword in the Star” by completely ignoring its existence. In its place, he relocates the character, now bearing the full name Rocket Raccoon, to the planet Halfworld. Instead of the generic sci-fi clichés that awaited Wayfinder on Witchworld, Hulk is greeted to something quite unique. Halfworld takes its name from the fact that it has two very distinct topographies. The first is a stripped down industrial factory zone ruled over by sentient robots, while the other verdant, natural hemisphere is populated by anthropomorphic creatures similar to Rocket. For example, his trusted companion is Wal Russ, while his love interest is an otter named Lylla. Gone is the Birtish accent, though, references to the Beatles song itself are even more prominent. McCartney’s “Now somewhere in the black mountain hills of Dakota” becomes “Now somewhere in the black holes of Sirius Major.” A “Gideon Bible” is an important plot device. Yet, within the overall oddball feel of the setting (which also includes references to silent movie slapstick), these allusions do not feel out of place. Indeed, you can enjoy the story perfectly well without getting any of them. It is simply a fun read.

In 1985, three years after Incredible Hulk #271, Mantlo received the go-ahead to give Rocket his first true spotlight, a four issue, self-titled limited series. In this outing, Mantlo returns to Halfworld and expands upon it. Readers meet the human population, referred to as Loonies, on account of their odd religious rituals, which include rites that involve straight-jackets. The Gideon Bible is the sacred text for both them and the animal population, even though the language is literally incomprehensible to anyone who reads it. Eventually, one character does decipher it, which sets everything Rocket thought he understood on its head. Meanwhile the, ahem, big two toy manufacturers are engaged in a mutually self-destructive war for gaining a monopoly on entertaining the Loonies. Oh, then there’s the monkey army chanting “Chim-Chim-Chiree . . .” Mantlo is firing on all cylinders here, stuffing this series with so many ideas that it’s inspiring. And on top of all that, it is also an engaging narrative filled with compelling characters. You could ignore all the subtext and still have a great time with this material. For those who wish to dig a bit deeper, though, there is definitely something there.

Sal Buscema did a fine job illustrating the first Halfworld tale in Hulk, but he is surpassed on the mini-series by Mike Mignola. Rocket Raccoon was some of Mignola’s earliest published pencil work (he had been cutting his teeth at Marvel as an inker). He had not yet developed the sketchier style which became his distinct voice, but his work still demonstrates a distinct personality. More important it is simply lovely. The creatures are adorable, when appropriate, and fiercely serious, when necessary. Mignola has the difficult task of flowing back and forth between these two moods, which he does expertly. Also, many of the facial expressions, especially those for Wal Russ, are priceless. One thing Rocket has been blessed with since the beginning is good artists. (You know you’re doing well when Mark Bagley’s rendition of you is one of the least memorable). Mignola’s work here is probably the best of them all.

Finally, it should be noted that these Halfworld stories explain the “Rocket” in Rocket Raccoon. Rocket possesses a pair of rocket-skates that propel him through the air. They are a neat little device which I wish he still kept in his arsenal.

Similar to his first appearance, the final issue of the mini-series muses that if Rocket and his friends encounter any further adventures “only you . . . and the future . . . can say!” Well, it seems that “you” never quite spoke up, because at this point Rocket slides back into obscurity. In the early 90s he popped up briefly in Quasar and She-Hulk, then disappeared again. His next notable appearance was in the Annihilation: Conquest mini-series, Star-Lord. Written by co-creator Keith Griffen, Rocket is drafted into Peter Quill’s strike force tasked with saving Kree civilization, and by extension, the whole universe. Out of this event came the template for Guardians of the Galaxy which, including Rocket, is headed to theaters this weekend.

Yet, one thing missing from Dan Abnett and Andy Lanning’s use of the character was not only the supporting cast of Half-World, but any reference to it. Rocket simply acted as if none of it had ever existed. Towards the end of their run, DnA turned their attention to this problem, addressing it head-on. Yep, it’s ret-con time.

In the aftermath of The Thanos Imperative, DnA scripted a four part Rocket/Groot story which ran as the second half of their first Annihilators limited series. Devastated by the loss of his friend Star-Lord, and the dissolution of the Guardians, Rocket has taken a soulless corporate mail room. (He is told that he only got the placement because the company needed to fulfill their “quota of cute sentient animals” for keeping up office morale). The first two chapters involve attempts on Rocket’s life, losing said soulless office job, and journeying to Planet X to reunite with his buddy and former teammate, Groot. These chapters are a lot of fun. There is a fair bit of humor, much of it invoking a talking device sneaked out of Rocket’s former workplace. It is also a good reminder of how well Rocker and Groot work together. There is also a poignant moment where Rocket sits alone, mourning Star-Lord. Plus, there’s a scene where Rocket fends off an assassin with mail-room supplies . . . 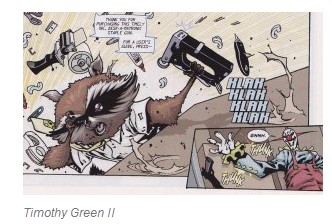 Eventually, Rocket traces the assassination attempts to a place called Halfworld. Hence begins the ret-con. Now, I am a huge fan of DnA’s run on Marvel’s cosmic titles; they are some of my favorite comics of the past decade. Normally, they do a good job of revisiting/reviving older characters. However, here it simply does not work. I understand what they were trying to do, since their ret-con could even possibly explain the original British tongued raccoon. DnA seem to be attempting combination of all the various versions of the character into one unified whole. Unfortunately, they do this at the expense of the great world-building Mantlo did in his Halfworld tales. More importantly, it strips Halfworld of its original charm. The result may be truer to the sensibilities of 2011 than 1985, but it is still a rare misstep in this otherwise outstanding run.

That pretty much leads us to the present. Rocket has been reunited with Peter Quill who is leading the Guardians once again. Earlier this month, Skottie Young launched a new solo series for Rocket, which got off to a promising start. Then there is that movie opening in a couple days. Yes, the future looks bright for one Rocket Raccoon hailing from “somewhere in the black hole of Sirius Major . . .”