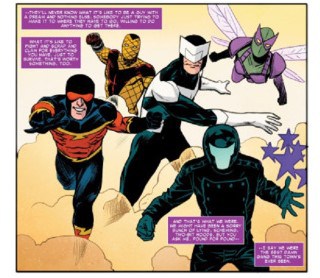 COMIC OF THE WEEK
552Views

When Marvel launched Superior Foes of Spider-Man a little over a year and a half ago, I did not think much of the concept. Honestly, it seemed like a craven cash-in on the popularity of Superior Spider-Man. A book centered on the lives of B(C?)-List Spider-Man villains? Really, Wacker who’s going to read this except those Spidey fanatics who buy anything remotely connected to Old Web-Head? Well, I have a friend who’s one of those fans actually, and he lent me the debut issue. After reading it, I immediately changed my tune. From the start Spencer & Lieber gave this title a distinct voice, blending crime capers with absurdist humor. Its rhythm felt like very few other books on the shelves. Today, Superior Foes comes to an end with an issue that perfectly captures the spirit of the series.

After a series of setbacks, #17 opens with Boomerang triumphant. He has successfully schemed his way out of a gang war and onto the pitcher’s mound for the New York Mehs. Using stolen Chameleon tech he has disguised himself as pitching sensation Demang Pendak, and is about to overturn the rookie strikeout record previously set by Fred Myers (aka the future Boomerang). In the process he may be able to win back his girlfriend and convince her to run off with him. See, he has this painting purported to depict Dr. Doom’s real face, which is worth a fortune. All those gangsters warring over on the other side of town think they’ll get their hands on the picture (along with the cybernetic head of legendary Maggia Don Silvermane), but Fred already has it squirreled away somewhere. Finally, Fred has tricked his parole officer Mach VII into taking a beating for him. Yes, it took some time, but Fred Myers has pulled off all the right cons.

Except he hasn’t. One by one, Spencer tips over the dominoes, revealing just how short-lived Fred’s sense of success is. There are double-crosses and reversals galore. To Spencer’s credit, none of these feel out of place, but fit naturally into the narrative. From the beginning this title has been one long sequence of one step forward, two steps back scheming. As such, it is only natural that the final issue be full of such moments. In that way, it makes for a perfect microcosm of the series on a whole.

Eventually, Fred is given a choice between public humiliation and almost certain death. I truly had no idea which option Fred would pick, and Spencer finds a way to continue the narrative without losing the ambiguity of the moment. Indeed, Spencer lays on another by suggesting that it might simply a tall tale on Fred’s part. Perhaps large chunks of the series may have been nothing but drunken boasting.

The entire series has been narrated by Boomerang, and in this issue it is revealed that Fred has been regaling a mysterious stranger at a bar with these stories of his criminal exploits. Spencer never states explicitly who’s been listening all this time, though a very strong hint is given. I won’t spoil the surprise, except to say that it provides a very satisfying final twist of the knife in Fred’s plans (even if Fred himself remains oblivious to it).

As for the other members of Boomerang’s former gang, they all get their brief moments as well. Most memorable is Shocker, who gets one hell of an entrance, combined with one of the best interactions with The Punisher ever. (As someone who has never been much of a Frank Castle fan, I love Spencer’s reserved deadpan take on the character). Hopefully Marvel will not immediately retcon this issue, but allow the events involving the Shocker to play out further. Also, more of the Beetle, please.

As he has all along, Lieber proves himself to be the right artist for the series. His cartoonish style brings out the humor of Spencer’s writing, while his great facial expressions emphasize Spencer strong character work. Together they have crafted a final issue that does justice to this terrific series. And for that reason, it is my Week’s Finest.