The Legacy of Doctor Strange’s Oath

Another January, another New Year. As I observed twelve months ago, the New Year is not only a good chance for looking ahead, but an opportunity for glancing back as well. Superhero narratives are often an ideal way of exploring connections between past and present. Comic book universes, especially those of the Big Two, are large sprawling entities. They are also rather patchwork creations, in which creators are continually building upon and/or revising the work of their predecessors. As such, what we reverently refer to as continuity has actually been assembled in equal measures of care and convenience, the spirit of old tales preserved more than the facts themselves. This is only natural for a living art form. If characters ceased evolving they would become museum relics of little interest to contemporary readers. The trick is learning how to build on the past without constraining yourself.

In 2006, Brian K. Vaughan tackled this issue of legacy in his limited 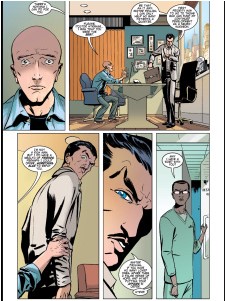 series Doctor Strange: The Oath. Over the course of five issues, Vaughan revisited the early days of Dr. Stephen Strange, brilliant neurosurgeon. Dr. Strange may have possessed stellar medical skills but is entirely lacking in basic bedside manner, at one point flat-out telling a patient that he will not care for him because there are others who can better “fund my continued development as a neurosurgeon.” Thus, the doctor advises, instead of pleading for treatment, simply give up “false hope” and “put your affairs in order.” Strange’s colleague Doctor Jonas Hilt tries to entreat on the patient’s behalf, explaining that he is prominent in the community as an advocate for the poor. Strange brushes off such considerations with the declaration that there is no better publicity for the hospital than Strange himself. Why worry about the life of a social worker, when his skills might serve something greater?

Such arrogance soon has its comeuppance, though. A car accident badly damages Strange’s hands. A fellow surgeon is able to save the nerve connections, but not undo all the damage. Strange is able to perform everyday functions, yet, the subtle skill needed to wield a scalpel is beyond retrieving. This plunges the doctor into a deep crisis which ultimately leads him to the Himalayas and a new calling as master of mystical arts. What works so well in Vaughan’s treatment of Strange’s character is how he handles the nuances of Strange’s developments. The present-day Doctor Strange is more concerned for the lives of others, having dedicated his life to the protection of our realm from supernatural threats. Indeed, the plot of The Oath revolves around Strange’s devotion to his assistant Wong. 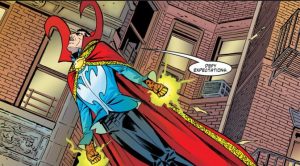 At the same time, traces of the old arrogance remain. This is a character who does not shrink at using his official title of Sorcerer Supreme. More than once, he makes assumptions about circumstances, which prove to be incorrect. Most vitally, though, he is faced with the possibility of saving everyone. While searching for a magical cure for Wong’s inoperable cancer, Strange stumbles upon a portion with the potential to eliminate any disease. Given enough time, he could replicate the compound and cure the world. Doing so, though, would mean certain death for Wong in the short term. However, is it fair of Strange to save one man, no matter how dear, if it means untold many will perish? Is it even right for him to erase disease from a planet already suffering from over-population? Vaughan is slipping some rather perplexing ethical issues into his narrative, and it is a testament to his skill as a writer how well he pulls it off. The Oath transitions naturally from four-color adventure to mystery to moral drama without missing a beat.

One way that Vaughan honors the legacy of the Marvel Universe is by tying his story to the roots of Strange’s character. Another is by the prominence given to supporting character Linda Carter, aka The Night Nurse. Debuting in 1972, Night Nurse was something other than another superhero series. It took three young women (Linda Carter, Georgia Jenkins & Christine Palmer) from the different backgrounds and tossed them together as roommates and new nurses at New York’s prestigious Metro General Hospital. Written by Jean Thomas (with a one issue assist from Linda Fite), the title was clearly meant to add diversity to Marvel’s slate, while grappling with the problems of contemporary society. The first installment finds Linda forced to choose between her career and a dashing young suitor. Against her parents’ wishes, Christine rejects the life of a society debutante in “an exclusive Midwest suburb” only to discover that the doctor she’s been assisting is a fraud. The series also tackled concerns of race and social justice. While the writing itself comes off as dated in places (and the male artist has given Christine the habit of lounging around the apartment in only her underwear), Marvel still deserves credit for trying something different. The experiment though was cut short at four issues, leaving Linda Carter and company pretty much unused for the next three decades.

Linda Carter was first revived by Brian Michael Bendis for a couple issues of his popular Daredevil run. Reimagined as a fully-trained doctor, Carter now runs a secret clinic for heroes who cannot simply stroll into the nearest public emergency room after their latest slug-fest with villain of the month. Other creators have plucked her out for the occasional cameo, but it is Vaughan who has contributed the most to her reimagining. The Oath opens in Carter’s waiting room; Iron Fist and Arana discuss the hazards of superheroing while old Bossa Nova plays in the background. Vaughan has fun here, poking at some of the absurdities of fiction and factual worlds. (Later in the series, Strange refers to how he should still have health coverage through his old Defenders group plan. Makes you wonder what having the Hulk on your HMO does for your premiums?).

The Night Nurse serves a larger role in the story, though, than whimsical asides. From her first appearance she is an assertive personality. Her skills remove a potentially fatal bullet from Strange’s chest, and afterwards she refuses to be sidelined. She joins Strange and Wong in their investigations, proving herself more than capable in a pinch. She and Strange have an appealing chemistry which naturally deepens over the course of the series. In the beginning, he takes to referring to her jokingly as Watson, yet by the end it is clear that she is more his equal. I finished The Oath wishing that there was more where I could see these two together. 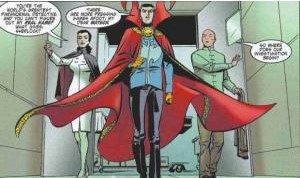 In such a way, Vaughan draws on the past of the Marvel Universe for new stories set in the present. The original Night Nurse comics had nothing to do with superheroes, yet by plunging Carter into the world of masks, creators like Vaughan have fulfilled the earlier potential of rendering strong, independent female characters. At the same time, it allows Vaughan to further frame his narrative in the context of Strange’s past as a doctor. And so, in more ways than one the past informs the present, crafting a tale that both enlightens and entertains.