In the 1980s, Teenage Mutant Ninja Turtles took the world by storm. The Mirage comics, originally a parody of the popular comics of the day, became a surprise hit, and was later picked up for a cartoon. The cartoon, though fun in its own right, removed most of the grittier aspects of the original, even censoring the use of Michelangelo’s nunchuks, and in Europe, changing the name to Teenage Mutant Hero Turtles. But, after the awful third movie and the end of the cartoon, the Turtles products began to take a dip in quality. There was another, lesser known live action show, the Next Mutation, that should probably stay lesser known, considering the quality of the acting, the cartoon sound effects, and the characterization. All things considered, the Turtles were in a bit of a slump.

Then, something changed. On Saturday mornings and Cartoon Network, there was a new animated version of the Ninja Turtles, one that went back to gritty roots of the original comic, adapting many of the most famous storylines while still creating a mythos of its own. It was epic in scope and popular in its heyday, but, after it ended and the new cartoon came out, it seems to have become largely forgotten. I’m here to rectify that with this little retrospective, where over time, I hope to look at every episode from season one through four and beyond, starting with the opening arc: Mousers Attack. I will warn you, though, beware because here there be spoilers.

The episode opens in media res, with a monologue by Leonardo about how he and his brothers are in trapped in an alleyway by a gang of Purple Dragons. It’s lifted almost word for word from the very first issue of Ninja Turtles. Every episode begins with a monologue like this, probably due to the highly serialized nature of the show. It serves as a hook for new viewers in standalone episodes and the beginning of an arc and acts as a method of recapping the story so far from the point of view of one of the characters during multiple part arcs. After the opening monologue, the story proper begins with a character establishing training session where the Turtles need to extinguish a candle without being seen. Leonardo is the only one to do it successfully. Naturally, he and Raphael start arguing soon after. Before their name calling contest can continue though, their home starts to shake and they’re attacked by mousers. The lair collapses and the Turtles are separated from Splinter. They call him using their cellphones and agree to a rendezvous point.

Unfortunately, the sewer tunnel has also collapsed, so they have to go to the surface. The rest of the plot focuses on their misadventures on the surface as they stumble upon a robbery, fight the Purple Dragons for the first time and lose to the Foot Clan for the first time.They escape with the money stolen by the Purple Dragons and after returning it to Officers Eastman and Laird (two recurring background characters modeled after the creators), they go to find their father. Meanwhile at the rendezvous point, Splinter is attacked by Mousers, and after falling through the floor, he finds a new home for them. When the Turtles find him, he takes him home, and our first episode ends with the leader of the Purple Dragons trying to explain himself to his boss, the Shredder in his civilian guise, Oroku Saki. Shredder has none of this and just kills him. I never understood that. Why do evil overlords just kill the mooks who fail them? Why not just demote them or something? It would do wonders for workers’ morale and his method is just a bad business model.

This is a pretty good opening episode. It establishes the main characters’ personalities, sets up the mystery where the mousers came from and has plenty of action. The shows fight scenes are  stylized and energetic. The animation itself is quite good, and very moody, perfect for the grittier look and attitude they’re going for. Many of the jokes are funny, but almost as many fall flat. I find it interesting that they didn’t tell the origin in the first episode. It’s just “here’s four anthropomorphic talking turtles and their adoptive rat father. Deal with it.” Still, it’s tons of fun. 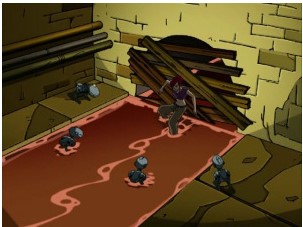 The opening monologue isn’t very important for this episode, so let’s just skip to the story proper. The Turtles and Splinter are getting set up in their new home. Mikey turns on the TV and seeing that it’s a press conference, he goes to change the channel, but Donatello wants to watch. The conference held is so that  a prolific inventor, Baxter Stockman can unveil his new invention: the Mousers! Dun! Dun! Dun! No joke, they actually did the dun dun dun sound effect in the episode. As much as I love the show, it did have its cheesy moments, and using that sting was one of them.

Later, at Stocktronics, Baxter Stockman’s company, intern April O’Neil sees an incongruity during a routine diagnostics test and points it out to Stockman. He brushes it off, making her suspicious. She decides to do a little digging of her own, and finds out that he’s mass producing mousers for some plan of the Shredder’s. Stockman catches her and sics the mousers on her. She escapes into the sewer. Meanwhile, Donnie has repaired a mouser and the Turtles chase after it. The mouser leads them to April, and they save her. Like every previous incarnation, April faints at the sight of them and the episode ends with Mikey asking if they could keep her, a reference to the original movie.

This episode follows the first half of the second issue of the original Mirage comics. It’s overall very enjoyable, but there’s one thing that’s a bit bothersome. Baxter Stockman is too overtly evil. In his press conference, it was all “my genius” this “through my brilliance” that. In universe, people can just pass him off as being massively arrogant, but to the audience, he may as well have be wearing a sign saying “I’M EVIL.” Other than that, it’s still a fun plot with decent action, and only some jokes fall flat.

Episode Three: Attack of the Mousers 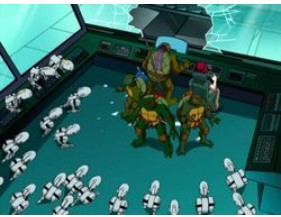 April wakes up in the lair and is understandably shocked, incredulous, and terrified. After fainting again at the sight of Splinter and waking up, she finally accepts that the Turtles are real. Splinter tells her some of their origin story. It’s basically the Mirage Origin where he was an ordinary rat until he witnessed a car accident that cause four baby turtles in a jar and a canister of strange science goo to fall into the sewer. He rescued the turtles and realized that the goo had mutated them. He then raised the four turtles and taught them martial arts. They turn on the news and see that there’s been a rash of strange bank robberies done by the mousers. The police are baffled, but the heroes know better, and decide to take down the mad scientist. Now, this begs the question: why did Stockman have that press conference? All that accomplished, aside from the ego boost, is making it easier for the crime to be traced back to him and his boss, Oroku Saki. Someone else had to have seen the press conference, put two and two together and would have investigated. Considering how easily April figured it all out and hacked his system, someone else could figure it out. And all of this for what, some more zeroes added to his bank account? Even April points out that he was already rich and could easily make millions legitimately. I know that this is part of the comic, but it was dumb there too. I guess, like Eric Sacks in the 2014 movie, he just wanted to be “stupid rich”.

The Turtles and April break into the building and confront Stockman. Not one to be a good sport, he takes the proverbial ball and goes home by calling all the mousers in a vain attempt to kill April and the Turtles while he makes his escape. April is only able to stop the mousers by activating their self destruct mechanism, thus blowing up every single mouser and the lab. Meanwhile, Stockman runs into an original character for the series, leader of the Purple Dragons and Shredder’s right hand man, Hun. Stockman is taken to Shredder. Stockman is promptly punished, but not quite as badly as the Purple Dragon leader from the first episode. Shredder also receives a thermal image of the Turtles, which he promptly shreds. Our episode ends with the Turtles accepting April into the family.

Of the three episodes, this was the most solid. Many of the jokes were funny, especially April’s denial at the sight of the Turtles. The fight scenes were better and April really proved herself as a capable and resourceful character. In the eighties and current cartoon, she’s almost constantly kidnapped. Here, this isn’t the case. In all six seasons she appears, she’s only kidnapped five times. For comparison, in the first season of the current series alone, April is kidnapped or needs to be rescued four times. Sure, she’s only sixteen, but since she’s also a psychic half mutant trained by the greatest ninja in the world and the kid with the hockey mask and no formal training is more useful in a fight, there’s a problem.

This opening arc is probably one of the weaker ones in the series. It’s good and still pretty fun, but lacks the epicness and character the show was later known for. It also has some animation kinks it still needs to work out such as the curious case of Leo’s appearing and disappearing shoulder strap. In the next batch of episodes, the series begins to hit it’s stride with the introduction of Casey Jones, the unhappy tale of a childlike AI, and the beginnings of the myth arc for the series. 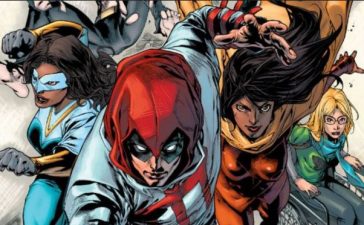