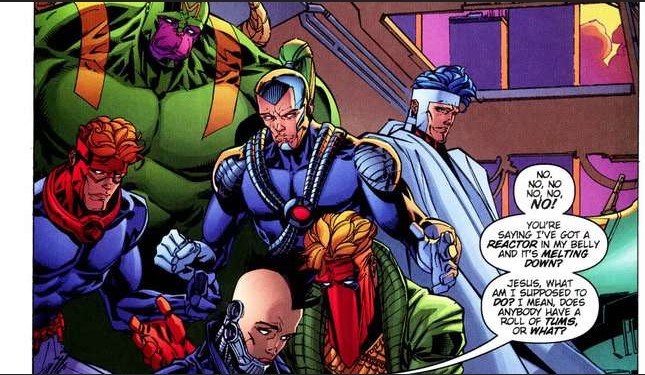 Alan Moore’s canonical comics work can almost follow a narrative through line when you look at his bibliography from a historical perspective. There are the early days in England doing Marvelman, Captain Britain & V for Vendetta, his transition to American comics via DC with Swamp Thing, Watchmen & The Killing Joke, and his evolution into purely creator-owned work at his America’s Best Comics imprint with work like The League Of Extraordinary Gentlemen, Prometha & Tom Strong. Look closely at those titles and when they came out, and you’ll notice a huge discrepancy. If you go by the Alan Moore work that is most resonant, you’d think he’d taken most of the 1990s off after leaving DC for the first time. While From Hell did take over a decade to complete, that wasn’t what held Moore up. In fact, Moore was working on some of the most popular comics of that time period that would be his large back catalog of work for hire for Image Comics. Why is this often his most overlooked writing? His run on Wildcats is perhaps the best example of both the flaws & growth that Moore showed in that time period.

To understand Moore’s work on at Image, it’s important to remember its context. Today, Image is the premier comics publisher allowing the medium’s best talent to create some of its most innovative and unique product, but in the beginning it was more like the competition of its time than the leading edge company it has become. Image was started by a group of top selling comics artists from Marvel & DC with a catalog of popular new superhero comics that ranged from pretty original (Savage Dragon, Spawn) to highly derivative (Supreme, Glory). Much of the work had taken influence from Watchmen, in making the heroes more gritty, and The Dark Knight Returns, in loud and vibrant art style, without having any of the nuance that made their influences elevate the medium. Most of the books were too simplistic and one-dimensional to approach the intellect that Watchmen provided or too clean to match the dynamic visual style of The Dark Knight. In spite of that, Image was insanely popular for much of the 1990s, partially because it were able to reflect an aspect of Gen X pop culture better than its competitors, partially from the celebrity of its roster and partially from the era’s speculator boom. Jim Lee’s Wildcats was very much a byproduct of all that, but it was also unique enough to stand out from the crowd in a lot of ways. As an illustrator, Lee was always on the high end of his Image peers with a clearer and more technically sound version of Liefeld’s work, which was still lively and fresh in the in it’s time. Wildcats was one of Image’s most unique series as it was based around two groups of aliens stranded on earth in a covert war with one another. It’s a genius concept that foreshadowed how Lee’s Wildstorm would eventually be home for such boundry pushing series like The Authority, Astro City, The Maxx or even Alan Moore’s own imprint, but it also started out pretty listless. With Lee on pencils & writer Brandon Choi scripting, Wildcats was an aimless series of superhero fights and crossovers with other Image titles. Even future comics stars like James Robinson & Jae Lee did brief and forgettable stints on the series. Moore came to Image doing the Jack Kirby pastiche 1963 miniseries & several one shots and miniseries for Todd McFarlane’s Spawn before taking over the monthly writing duties on Wilcats for a run on the title that is at times brilliant, at other points regressive, but always interesting when reading it in retrospect.

When Moore comes onto Wildcats, he instantly revamps the series and realizes its potential by splitting the team in half. While several members stay on earth to fight crime, most of the series’ main players are brought back to their home world to discover that the war they’ve been fighting has been over for centuries. This was used as a way to mirror the infamous Japanese Holdout of post-WWII. It’s a brilliant idea that Moore pushes further once the Wildcats end up on planet as a way to comment on the type of classism that’s common for western Europe while getting to build out a fictional world in outer space from scratch in a way that the writer never had prior. The beginning stages of Moore’s time on the title are some of the best, as he seeds all kinds of insightful ideas and potential storylines lines in the series that are never fully realized. Whatever Moore had planned for the Khera story, the end result is ultimately underwhelming as it’s finale abruptly manifests in one quick issue, causing the Wildcat’s team to leave their home world and go back to earth. In one single issue, all of its potential is deflated, and while the issue itself isn’t bad, it’s not the ending that Moore was capable of.

After its initial chapter, Moore’s Wildcats jumps into a line-wide crossover (perhaps the only time Moore’s participated in such). Moore’s

time on Wildcats closes itself with the Gang War storyline back on Earth, a low stakes, compressed and dumb down almost Watchmen style ending with none of the subtext. In spite of it’s many shortcomings, Moore’s Wildcats run is highly enjoyable. The art is of its time and the story never gets off the ground the way it could, but Moore keeps it engaging and interesting despite the flaws in the storytelling. It’s perhaps carried by Moore’s character work, an often underrated skill of his that keeps the storyline afloat. It’s never bad per say, but it’s never that great either; although, often times it feels like it could go either way.

The Alan Moore Wildcats run isn’t among the writer’s many great works, but it’s not solely for his die hard fans either. In a lot of ways, it feels like the majority of modern day superhero comics: lots of build up, anticipation and then the underwhelming conclusion before moving into the next story line. I suspect, like Moore, most writers are going for their Watchmen when they write superhero comics, but also like Moore, they often end up with Wildcats. Of course everybody wants the comic they are reading to be among the greatest of all time, but most of the time, they are going to regress towards the mean and hit a base level of standards. If that’s anything like Moore’s Wildcats, then we’re in pretty good shape.