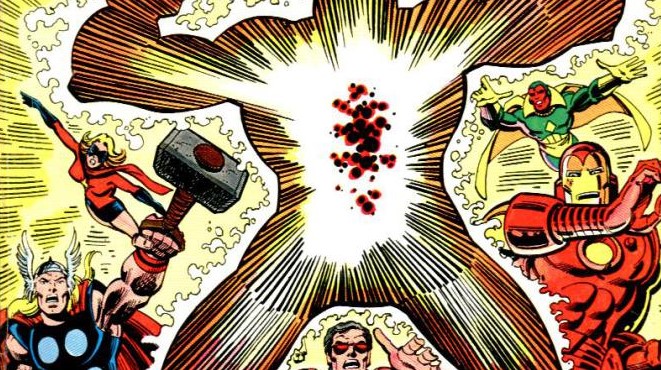 The Saga of Michael Korvac 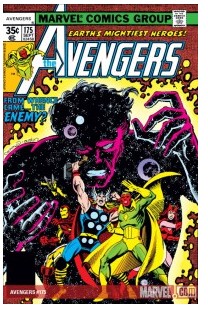 A year ago, Marvel revived the original 31st Century Guardians of the Galaxy. They resurfaced in a back-up story to Guardians #14, an oversized anniversary issue celebrating 100 issues of the franchise. Written by Dan Abnett it was a fun, intriguing tale of the Guardians fighting the Badoon, while trying to determine the cause of temporal anomalies. At the time, I suspected that Marvel was laying the groundwork for a longer story, perhaps one that would bring the Guardians to the present day? Why not? It had happened often enough in the past. And a couple months ago that is exactly what happened. Last month, the Guardians, now teamed-up with the Avengers, finally pieced together the puzzle. The solution: Michael Korvac. The mention of his name is far from reassuring to those who faced him in the past.

And why would that be? The name Michael Korvac does not exactly sends chills down the spine a la Victor Von Doom. In fact, his co-creator Steve Gerber once likened the character’s name to a vacuum cleaner. Nor does he have a particularly large body of appearances. Yet, he is considered one of the greatest foes the Avengers have ever faced.

So, who is Michael Korvac? 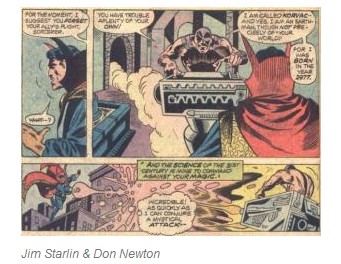 Korvac was created in 1975 by Gerber and Jim Starlin. (Now there is a pair whose late-night conversations I would love to have overheard). He was intended as a throw away villain for Giant Sized Defenders #3. Korvac is a human computer technician living in the 31st Century where Earth and its solar system has been conquered by the Badoon Brotherhood. Korvac, out of career self-interest, collaborates with the Badoon. He quickly rises in rank. However, one day he is discovered at his work station, passed out from exhaustion. As punishment the Badoon fuse Korvac’s body with a bulky mechanical bottom half. Korvac, for his part, exploits this new situation to augment his power considerably. (As is often the case in these older origin stories, the explanation of a character’s powers boils down to “I learned how to do that”). It is this version of Korvac which was pulled back through time by the Grandmaster. The Defenders beat Korvac, end of issue, and, as far as Gerber was concerned, end of Korvac.

Two years later writers Len Wein and Roger Stern revived Korvac for Thor Annual #6. Now it was revealed that Korvac took advantage of his defeat at the hands of Doctor Strange to “synthiz[e] a portion of the Grandmaster’s energies.” Yep, he learned how to do more stuff. Korvac returned to the 31st Century with even more abilities. He could now terraform an entire planet from scratch, as well as teleport objects and living creatures from anywhere in space and time. This is how Thor accidentally hitches a ride into the 31st Century where he teams up with that era’s Guardians of the Galaxy. Together they take on Korvac and his Minions of Menace. This is a delightfully odd-ball story; the Minions in particular are an appealing band of eccentrics. (Wein and Stern co-plotted the issue with Stern getting the scripting credit). The writers do succeed in making a case for Korvac being a major threat, even though the team of Sal Buscema and Klaus Janson can only do so much with Korvac’s clunky visual design.

That would soon change, however.

The following contains spoilers for The Korvac Saga

A few months after the Annual, the Guardians travel to the 20th Century, arriving at the present day Avengers Mansion. After getting off on the wrong foot (calling The Beast a monkey is never the best way to make a first impression), the two teams of heroes, pledge to work together. The Guardians are convinced that Korvac has traveled back through time in order to murder the child Vance Astro before he can become an adult, join the space program, travel into the 31st Century, and lead the Guardians in their defeat of Korvac’s plans. This is the beginning of The Korvac Saga, which strictly speaking runs from Avengers #167-8, 170-7 (#169 was a fill-in issue). However, for much of these issues, the Korvac plotline is regulated to the background, as the Avengers battle Ultron, learn to trust Jocasta, fend off Tyrak, navigate bureaucratic red tape and once more foil the Collector’s attempt to collect them.

It is in this final confrontation that the threat of Korvac moves to the forefront. As an Eternal, the Collector had sensed the devastating potential of Korvac’s power. He sent his daughter disguised as a mortal woman, Carina Walters, to win Korvac’s affections and serve as a spy. Meanwhile, just in case reality is irreparably harmed, the Collector wishes to preserve the Avengers for posterity. Naturally the Avengers resist. However, before the Collector can reveal the name of The Enemy, he is suddenly vaporized by a blast from afar. Carina has fallen in love with Korvac, and torn by conflicting loyalties, betrays her father to her lover. Clearly, Korvac is a force with which to be reckoned.

As the reader learns, though, Korvac has gone through a transformation since arriving in the 20th Century. His powers for example, have once again been greatly augmented. Soon after traveling to the present, he infiltrates Galactus’ spaceship, where he is able to study the power cosmic and, yes you guessed it, learn how to harness it. Korvac is now not only one of the most powerful entities in existence, but able to shield his presence from even the likes of Eternity. In the Thor Annual he sought the power to reshape the universe in his image; now he actually possesses that power.

Yet, what the writers do next with Korvac is interesting. (All of The Korvac Saga was plotted/co-plotted by Jim Shooter, Shooter scripted many of the issues himself, though some were handled by other writers, such as Bill Mnatlo and David Michelinie). Readers would naturally expect that Korvac dives further into the waters of megalomania, gleefully asserting his ego onto reality, jusr like a certain Mad Titian has been wont to do. However, similar to some of Thanos’ experiences with ultimate power, Korvac turns inwards. He adopts an unassuming house in Forest Hill, Queens (yes, there is a Peter Parker/Mary Jane cameo). He remakes his physical appearance, giving himself a rather idealized physique, while also clothing himself as inconspicuously as possible. Settled at home, he monitors the universe, considering the ways he might tweak it into improvement. He might make threatening statements about the Avengers, but he has no wish to confront them, or anyone else. He desires no credit for his actions. He simply wishes to reconfigure the flaws in the reality. 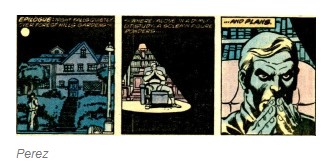 Still, who set him up as god, right? Such power is still too much for any one man to handle, or so the Avengers and Guardians think as they come crashing through his door. The time for hiding is over, and the heroes have pushed Korvac into the open. Korvac warns them that now that other entities such as Odin, Zeus and Mephisto can perceive a threat to their petty fiefdoms, unimaginable war is about to shake the cosmos. Yet, still the Avengers will not back down. Captain America has too much experience with men who wish to refashion the world as they see fit .And so the heroes charge forth.

And they fail. Not only do they fail, but they die. One by one Korvac swats them away as though they are flies. By the time that he and Carina are done, the only two left standing are Thor and Moondragon, and they are only spared by luck. During the battle, Carina hesitates coming to Korvac’s aid, still unsure as to where her loyalties lie. Believing himself bereft of love, Korvac collapses, his life force dissipated. Sensing her mistake, Carina goes into a berserk rage, killing Starhawk, Vision and Iron Man, before laying down by the side of Korvac. Her fury spent, she shuts her eyes to join him in oblivion. Thus reality is saved not by heroic force, but a pair of broken hearts.

Unless, it is not saved, but doomed. Throughout the battle, Moondragon remains a passive figure. Her telepathic abilities have granted her a view into his mind. She sees a good man, who had the potential to make the universe a better place. Korvac had a dream, and the Avengers’ policy of shoot first, ask questions later failed in more ways than one. Even in defeat, Korvac was gracious; his last act was restoring life to the fallen Avengers and Guardians. Shooter, who scripted this final chapter himself, lends his Saga no triumphant ending. Instead, he leaves the reader with Moondragon weeping for what might have been. “For I stood by and watched as children slew first the dream then the hope.” Again, like Starlin in his cosmic epics, Shooter spreads his canvas so wide that he leaves the reader wondering if traditional measures of good and evil continue to apply. It is a fascinating transition for a character who started out as a poorly designed cyborg with a name reminiscent of a household appliance.

In later decades Korvac popped up a couple times, but never leaving much of a mark. As revealed in last month’s Guardians 3000 #7, though, Korvac has returned to his old home in Queens, once again about to confront a united front of Avengers and Guardians. Time is running out, however, and not just for the heroes, but all of reality. How Korvac fits into Everything Ending, as well as Abnett’s forthcoming Korvac Saga is one of the facets of Secret Wars I am most looking forward to exploring.