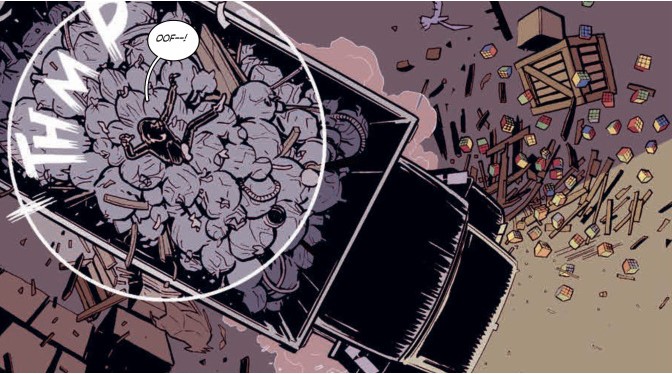 COMIC OF THE WEEKTHE1WHOKNOCKS' REVIEWS
536Views 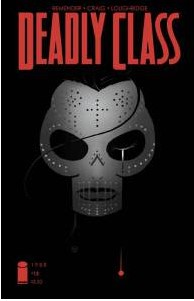 By Rick Remender and Wes Craig

Spoilers ahead. Sorry, I just can’t do it without.

Deadly Class kicks deadly ass. If you aren’t reading this book, Alex, then you should probably consider, Alex, catching up, Alex, so that you do not miss any more of this fantastic experience, Alex. Issue #12 was my favourite issue when it came out last month and this week, issue #13 is even better. There were so many great books today. In total I read 26 different comic books. With a stack of “contenders” piling up I reached Deadly Class. Upon completion I put that stack of “contenders” back in their box because as soon as I finished Deadly Class I knew. It wasn’t just great, it was special.

Rick Remender has been keeping the quality of books he releases very high, but there is something different about Deadly Class. To me it feels like Fear Agent. I don’t mean the book feels like Fear Agent, I mean the actual feelings going on inside of me. I get thrown back to the first time I read Fear Agent and it felt different than anything else I had read…it felt special. It could have just been all the Mark Twain quotes hypnotizing me, but whatever the case I would put Fear Agent in my top five all time. Remender is giving me the same vibe with Deadly Class. Sure, it is a great book and receiving praise now, but that is not enough. I think this book is special enough to live on as one of the great Remender works.

Look at that cover. Don’t just glance at the cover, I mean really LOOK at that cover. Simple, chilling, emotional and haunting. The intensity of the cover is matched by the interior pages. So, what goes on in those interior pages? Glad you asked. Deadly Class has a very interesting premise. A group of “damaged” teens (not damaged enough to tattoo it on their forehead like Jared Leto’s Joker, just you know, real life damaged) have been recruited to a school of assassins. Anyone who has seen a movie about assassins knows that you have to strip away all emotions and personal ties these kids have. If you pluck a kid off the street whose parents were gunned down by drug dealers, then bingo! Two birds with one orphan. The best part though, this book is not actually about a school of assassins. This book is about a group of kids who have nothing, a group of kids whose lives are hanging by a thread, a group of kids who find stability, friendship, love and purpose in the only thing we actually have in this world, each other. 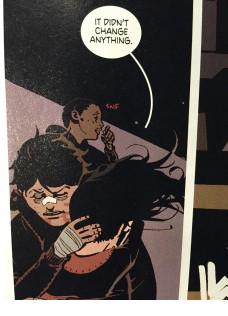 The relationship between Marcus and Maria is the core of this story. To say they have been through some rocky times would be, well, it would be lying. I would not consider my girlfriend trying to shoot me with an arrow “rocky times”, I would call that “attempted murder”. However, if you can make it through the valleys and find that someone who you can forgive for trying to kill you, then I guarantee there is nothing in life that will tear you two apart.

This issue opens on Marcus falling from a bridge and Maria captured by her father. Marcus gets impressively caught by Willie driving a dumpster, so you don’t have to worry about that. Things look rough for Maria though. Captured in a car with her father and two other stone cold killers. I will admit, I was quite worried for Maria at this point, until her idiot father was done talking and she finally spoke saying, “You misunderstand father. You haven’t captured me…” Maria crashes the car and uses those assassin skills to her full advantage. This scene is so visually impressive. Wes Craig must sit back while he is drawing this book and say out loud, “Damn! This looks really cool. I’m super good at drawing stuff” Have you ever seen a teenager, with cinco de mayo face paint, slaughter three grown men with a hand fan. It is one of the coolest action scenes I have seen all year. However, the scene is so filled with rage and revenge, so filled with blood and violence, when it is all over, Maria still says these heartbreaking words, “It didn’t make anything better”. Her whole life she has been plotting and dreaming of murdering her father. Revenge was all that Maria knew. Now that she has it, it doesn’t matter. It doesn’t bring her mother back and it sure as hell doesn’t make that deep dark hole inside go away. A beautifully tragic moment for Maria. 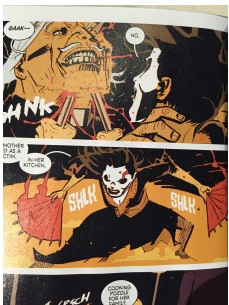 Finally the children get back to the school. If you recall, they were not suppose to have left and because they did Lex is dead. This is not going to go over well with the headmaster, but Maria has devised a plan to cover it up. She sets up a private meeting with the headmaster and explains that Lex may have snuck out to kill a dangerous murderer. Well, you know what I didn’t see coming? That old fart of a headmaster poisoned her, not for disobeying orders, but for getting caught. A failing grade in this school is Death, hence the name Deadly Class. The final scene is Maria collapsing onto a coffee table and the close up of her face slowly drifting away. There is a chance that this poison did not kill her, but I have learned in these situations to not hold out hope for the unknown. I have learned to react to what has happened now, and what has happened? Maria is dead.

The cover of this book could not have been better. This was an issue about Maria and Maria only. Maria takes us through all the emotions that a good book should. We feel worried for her well being when she is captured. We feel excited when we find out she has a plan. We feel justice when she brutally slaughters her mother’s killers. We feel heartache when her revenge does nothing to calm her soul. We feel calm when she comes up with a story to cover all this up. And finally, we feel sorrow when she crashes into that coffee table. Life is a bunch of emotions strung together to give us direction and purpose. Some emotions we choose to follow will only lead to worse ones. In the end we all die. Maria has to come to her horrific conclusion feeling unsatisfied. If you died today, would you feel satisfied?