On the Road with Ann Nocenti’s Daredevil 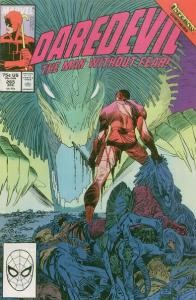 Following Frank Miller on Daredevil the first time he departed the title was surely high-pressure; taking over the second time he departed, in the wake of Born Again (arguably the most popular Daredevil tale ever) was even more so. Yet that task fell to a largely untested Ann Nocenti. At that point in her career, Nocenti had scripted a couple mini-series in the X-line, most notably co-creating Longshot and Mojo in the process. Daredevil was her first opportunity as a regular writer of an on-going series. She ended up staying on the book for a little over four years, during the course of which she would carve out her own her era for old Hornhead which follows in some of Miller’s footsteps, while leaving her own stamp on the character.

I read some of Nocenti’s Daredevil when it came out, though it was mostly in piecemeal fashion. Regardless, they were issues I remembered fondly, and had been wanting to revisit. Some eagle-eyed longbox digging at s recent comic convention netted me a twenty-two issue run (#261-282). These issues are the mid-point of Nocenti’s tenure, beginning in the aftermath of Daredevil’s defeat at the hands of Typhoid Mary. Battered, left for dead, and possessing barely any motivation to pull himself together this is Matt Murdock at one of his characteristic lows. It does not help his mood much that his story is bleeding into Marvel’s Inferno Event. Thus, besides his usual internal demons, he has a city full of literal demons with which to contend. It is honestly a bit of a rocky start to the batch, though never dull. John Romita Jr.’s thrilling, jagged art adds much to the experience. The man was clearly born to draw devilish creatures, which would come in handy down the road.

After the dust settles, Nocenti makes a bold choice to exile Daredevil from his comfort zone. Believing that the last remnants of his life in New York have been utterly destroyed, he buys a train ticket out of town. By shaking up his surroundings, Nocenti breaths some fresh air into the book; the change of scenery allows her to get away from some of the urban grim an’ gritty tropes inherent in Miller’s legacy. However, this does not mean that the book is about to become a light-hearted romp. Daredevil is still a beaten-down man, who only slowly gathers his strength once again.

In addition to the new setting, Nocenti also gathers a new supporting cast around the hero. He first comes across Brandy Ash, an activist hoping her extreme actions might bring more awareness to the horrors of factory farming. (Written a year after Grant Morrison begun his acclaimed Animal Man run, the cause of animal rights was still fairly unexplored territory in comics). Brandy is no “meat is murder” radical, she simply wants humane conditions. Of course, the fact the targeted farm is run by her father Skip, who also has some rather shady government connections, only makes the matter more personal.

Or perhaps that is the problem? Nocenti, while sympathizing with Brandy’s cause, never fully endorses her actions. Yes, Skip’s method are reprehensible (at one point he instructs his scientists to breed the legs out of chickens so he can save on cage space), but the ends do not necessarily justify the means. And what are the ends anyway? Releasing a farm full of animals into the wild might make great looking TV, but does it help the animals? Is it humane to expect creatures born in captivity to suddenly be able to fend for themselves? Besides, what are Brandy’s true motives anyway? Does this have to do with justice or her own guilt over living off her dad’s dirty money? There are no easy answers and it is to Nocenti’s credit that she never pretends like there are.

Also, farm animals were not all that Skip was breeding on his farm; he was also trying to create the genetically “perfect” wife. She is everything Skip could ever want for a partner: beautiful, skilled at domestic tasks, and living only to serve men. Raised with a single set of expectations, subject Number Nine (strangely Nocenti never grants her a proper name), has no other reference points except what she was taught. All she knows are the fairy tales fed to her by her “father.” Even after her escape from the lab of her birth, she finds it difficult to break her programing. This naturally leads to a few confrontations with the more enlightened Brandy. These dialogues may be heavy-handed at times, but they tackle many important questions about the place of women in society. Nocenti’s inclusion of them in superhero comics of the time was a welcome decision. As for the progress our culture has made in the last 25 years? Well, honestly, the themes are little different from ones Kelly Sue DeConnick currently explores on Bitch Planet.

While all this is going on Karnak and Gorgon show up, following-up on a plot point from Nocenti’s recent Inhumans graphic novel. Also, Acts of Vengeance happens, which, for Daredevil means that Doctor Doom has resurrected Ultron and sent the robot to kill hilm. What on the surface might strike the reader as arbitrary Event interference actually fits well into the overall structure. (Also, seeing Doom arrogantly claim to know how best to piece Ultron back together is pretty fun). After several issues debating the ethics of creators/creations, who better for Daredevil to face than Ultron the Marvel Universe poster boy for failed child rearing? In addition, Doom’s tinkering with Ultron has left him rather addled. Doom merged all the previous Ultrons into one somewhat schizophrenic personality.

It is a decidedly unconventional, and honestly refreshing, take on the character. Part of Ultron wants to reject his conditioning, while the other wishes to embrace it. Ultron still strides towards perfectionism, only no longer is sure what that is or if it can even be achieved. After all, can anything be perfect? Is everything imperfection? Therefore should everything, including myself be annihilated? In Nocenti’s hands, Ultron becomes more of a misunderstood monster type than genocidal killer. And just when Number Nine might finally have broken through to him, the “heroes” come charging in for the kill. In the end, Number Nine is left with Ultron’s severed head promising that she will restore the good in him someday. It is an intriguing end note and it is a shame that neither Nocenti nor anyone else ever followed-through on it. (Unlike other Nocenti contributions like Typhoid Mary or Blackheart, Number Nine was never heard from again).

The On the Road storyline culminates with a descent into Hell (or the Netherlands or whatever Marvel was calling Mephisto’s domain at the moment). Mephisto had been trolling around the edges of Daredevil’s life for a while at this juncture. (#266’s “A Beer with the Devil” famously depicted Daredevil spending Christmas in a bar with Mephisto). In #279, a rift opens in the earth, plunging Daredevil and his companions deep beneath the surface. Scattered, they find themselves facing their own particular torments.

Where Nocenti goes from here is not necessarily what readers would predict. Yes there are scenes of Daredevil shoving off demon cannon fodder but that never really seems to be the point. The point is his internal struggle to finally reclaim that inner strength that Typhoid Mary beat out of him back in Manhattan. Nocenti is more interested in the psychology of the situation. For example, the scenes with Karnak and Gorgon strongly reference Jean-Paul Sartre’s play No Exit (i.e. “Hell is other people”), while Number Nine awakes in Billboard Heaven. Number Nine’s clumsy nature grabs the attention of Lucifer (”Lucy”), a non-conventionally attractive, somewhat androgynous figure with glasses and a Public Enemy Fight the Power t-shirt. Lucy teaches Number Nine to forget all those fairy tales about White Knights on horseback, and simply embrace the one within herself. Which in a way is what all the characters in this section do: they tap into their own perseverance.

In the end, there is no big battle between Daredevil and Mephisto. That is not the type of story this is. It is about emotional conflict, not physical combat. When the time comes, Daredevil simply turns around and guides his companions to freedom. These are a fascinating set of issues which show Nocenti at her sharpest.

Also at his best is Romita Jr. While not as sizable as Nocenti’s, Romita Jr. had a long run on Daredevil, which (except for a couple fill-in artists) included all the issues discussed in this article. Romita Jr.’s style at the time had a very rough quality to it, which suits him better than the smoother one he uses today. His jagged line lends the art a distinct personality. His Daredevil pages are dynamic, full of emotion and energy. As in the Inferno issues, his skills are particularly apt for the Netherworld section. He shows a wide imagination for shaping the various corners of the realm. His redesign of Mephisto as more lizard or toad than man remains one of, if not, the most striking depictions of the character ever. His work on this series is fantastic. It is the strongest output of his career, earning him a place among the best Daredevil artists ever.

Together Nocenti and Romita Jr. crafted a vision of Daredevil which built on what came before, while simultaneously adding their own voices. The results may have their flaws, yet those are outweighed by their strengths.

Now I just need to piece together the rest of their runs . . .