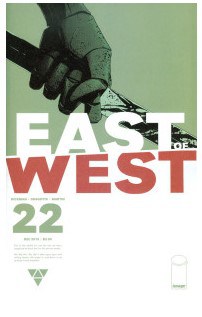 East Of West can be a difficult comic to follow. There is so much information and back story that it’s sometimes hard to remember what happened the month prior, especially when it goes over a month between issues. There are installments that are dense with dialogue and back story supported by very little in the way of plot movement or action. Those issues are generally pretty good as East Of West is often worth it alone just for the creativity and craft that Hickman, Dragotta & Martin bring in each issue, the world building is fascinating and there is an endless well of subtext for further analysis beyond the immediate narrative. But every once in a while, they do a monthly issue that is nearly perfect. This goes back all the way to the series beginning where the conclusion for the first arc in the fifth issue felt like it completely paid off on it’s preceding installments while re-framing expectations for the series. East of West is some heavy shit and it requires more concentration then most other comics but that’s also part of what makes it rewarding. But sometimes, the book can be at it’s best in it’s moments of simplicity like here in issue #22; beautiful, visceral, brutal, violent, detailed and immaculate.

Issue #22 of the series is one of those silent issue, a cool concept that’s maybe a little overdone at this point. Most silent issues work as long as the artist is on point but as a trained comics reader, most of us figure it out within a few pages. There are commonplace ticks & cues when approaching the concept. But East Of West #22 bypasses all that, it is so immersive that you don’t even realize it’s a silent issue until it’s conclusion. Artist Nick Dragotta accomplishes that in his rich details, symmetrical line work, sleek design, artful panel structuring and sharp visual story telling. East Of West #22 is high intensity and full of action, but Dragotta never skimps on letting his art tell the full story as each panel feels purposeful for maximum impact. He manages to go in and out of different styles for his layouts on each page depending on each scene’s level of urgency. That with the way Dragotta contrasts the shifting expression of the Mao Xiaolian character gives the narrative a level of tension once she is introduced into the story that stays with her every moment of her appearance. Colorist Frank Martin maintains the consistency of the art with the books trademark burnt orange sheen against the brighter mechanical colors that keeps with the comics cyberpunk western aesthetic. While Hickman’s actual writing directly for the reader may not be front and center here, his economy of style and masterful pacing is readily apparent throughout while the inclusion of the timer is the sort of genius insight that only Hickman would think of.

East Of West #22 is about the beauty in the elemental. It’s a thrilling, suspenseful and tight narrative executed to perfection. This isn’t just another silent issue, it’s East Of West doing a silent issue and as with all things related to the series, that becomes something else entirely. Something where the craft is undeniable, where the story is like nothing else and where the end product is completely unpredictable; something immersive in it’s sheer excellence.