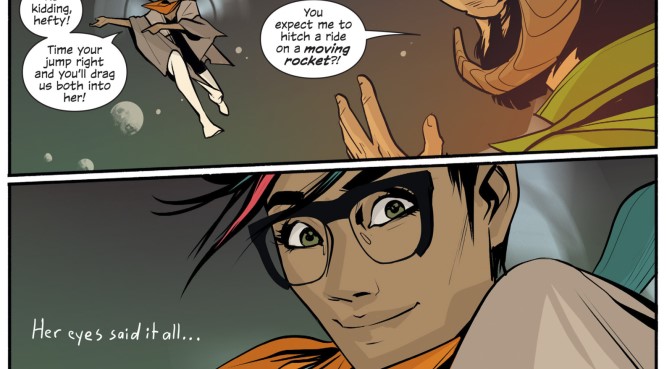 The holidays are a time of bustle and confusion. It may sound cliché that we often lose track of what really matters, but, you know what? There is a fair amount of truth behind such clichés. So, it seems rather appropriate that for this final Finest of 2015, I selected a book centered on an exploration of family.

Last month, Saga returned from its intra-arc sabbatical with an update on Hazel. The issue focused on how well (or not) the child was adapting to life in a refugee detention center. This week, the series shifts the focus to her parents, asking how well they are handling their daughter’s absence. The answer is not too bad, under the circumstances.

#32 opens with Marko gripping Alana by the throat and threatening her life with not so polite language. Marko has a hoodie pulled up over his head and is wearing dark sunglasses. His stubble has by now thickened into a full beard. Alana for her part has on a pair of plain glasses, matched to rather non-descript clothing. Each in their own way give the impression of someone who does not want to be noticed. (Though really Marko, a bright green hoodie? That was your idea of low profile? Was the store all out of fuchsia?) Marko being Marko can only keep the tough guy act up for so long, though a little sleeping dust takes out the guard anyway. It would seem that the couple are trying to bluff their way into the records room of the conglomerate contracted with running refugee centers like the one holding Hazel and Klara.

In many ways, Marko and Alana have always been the heart of Saga. The journey started with them, tracing the many ups and downs for their relationship. Recent issues have concentrated on the downs, as a series of poor decisions temporarily separated them. They are back together again, fixated on tracking down their daughter. As always, Vaughan does a great job of invoking the dynamic between the two. The action sequence of Marko and Alana confronting the building’s Constables is well-done, yet, the most exciting element of the issue is watching Marko and Alana interact with each other.

It is no secret that Vaughan is a master of character beats. While Marko and Alana are not necessarily chilly with each other at the beginning of the issue, there is a bit of distance between them. They have lost their child which understandably has cast a bit of a shadow on their interactions. The fact that their own actions, both directly and indirectly, caused this loss to happen only makes their guilt worse. They are testy, quick to second-guess the other, as well as reinforce their own sense of failure. Yet, they do work well together. Whatever else may have happened there remains a bond that ties them to one another. They are there for each other, not simply their child.

Vaughan brings out this element gradually, as the adrenaline of circumstances increases. There is a moment where in order to escape, Marko needs to trust in his wife’s insane sounding ad-hoc plan. Marko asks if she really “expect[s] me [to] hitch a ride on a moving rocket?!” Alana does not say anything in return, simply tossing him a playful, almost girlish smirk. It is a gleefully, good-natured side of Alana rarely seen by readers. Her expression is beautifully rendered by Fiona Staples and makes crystal clear why Marko loves this woman so much. The experience reminds Marko and Alana as well, pulling them together, both emotionally and physically, in a way they have not been for a long time. As they lay naked together afterwards, Staples fills the scene with a blissful, content atmosphere. It is a lovely (and sexy) feeling to behold.

While the issue focuses mostly on Marko and Alana, it also gives a peek at the present whereabouts of Ghus and Prince Robot. Ghus continues to be his usual, endearing self; he literally rides into the scene on the back of his galloping walrus. Prince Robot though has experienced greater upheaval in his life. On the outs with his father King Robot, he only allows the title Sir Robot. When Ghus refers to Sir Robot’s son as “the princeling”, he is instantly corrected. The child’s name is Squire—that is all. Whether by choice, being disowned or a combination of the two, Sir Robot has cast aside his royal roots. He is trying to carve out a new life for himself, away from all the craziness that resulted from the Marko/Alana mission. It is a brief, though, intriguing new direction for the character and one which I am eager to see more of. Family has always been a central motif of Saga, and Sir Robot and his Squire promise to add another compelling variation to the theme.

Another constant throughout the title has been Staples’ stellar art. Her design work is striking, especially in the glittering halls of the corporate giant. She conveys the excitement of Vaughan’s story without missing any of his character beats. She illustrates a couple leaping through the air towards a speeding ship with the same dexterity as one character smiling at another. The final page depiction of the young Robot is a stunning image. And yes, Ghus is still utterly adorable. Those whiskers . . .

Saga #32 starts with a corporate break-in, before revealing its strongest interests rest within interior spaces. This subtle use of character and theme makes #32 another great chapter in the fantastic narrative that is Saga. It earns it the title of This Week’s Finest. 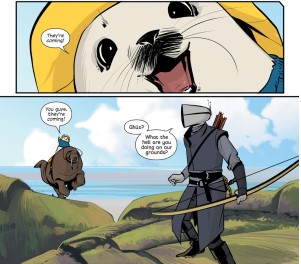