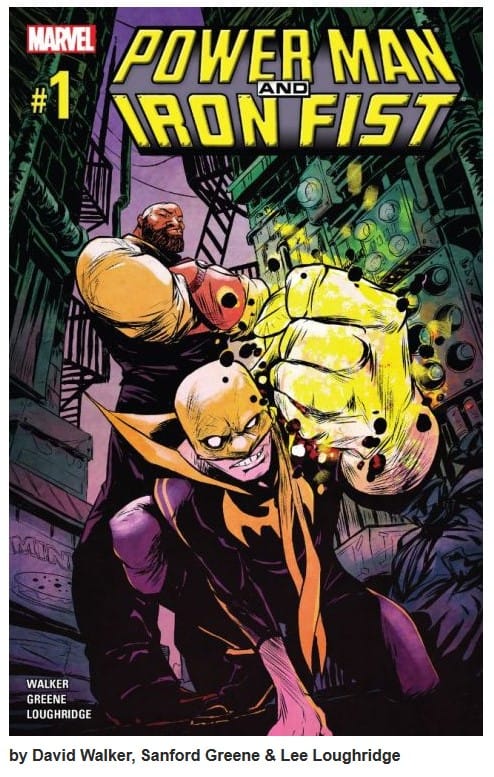 “Yeah she’s family, but this is a bunch of fiddle faddle”

During an interview on the Nerdist podcast, Quentin Tarintino talked about after Reservoir Dogs, before superhero films became the defacto summer tent-pole movie studio franchise’s, he had considered getting the rights to Luke Cage for a movie adaptation. At the time, he was discouraged by the reaction of his comics reading friends to his choice of Laurence Fishburne as Luke Cage because he didn’t have the physique of the hero and that turned him off to the entire ordeal.  As cool as that might have been, I’m pretty sure the world was not ready for a Tarintino Luke Cage film and to be truthful, they probably still aren’t. But comics readers are and with that, we get Power Man & Iron Fist #1 by David Walker, Sanford Greene & Lee Loughridge; a comic that stands on the same shoulders of the great crime & exploitation fiction as Tarintino to make one of the most enjoyable debut issue’s in Marvel’s most recent All New All Different relaunch.

Power Man & Iron First is fun, like REALLY fun. It’s effortlessly vibrant, lively and witty with fluid and natural pacing. Writer David Walker has been solid with DC’s Cyborg & his Shaft has gotten more then it’s fair share of praise but Power Man & Iron Fist is hitting a new stride for the writer in his comics prose. His dialogue is whip smart with a mix of cool disaffection and hilarious every man insights while his character work manages to showcase a depth and distinction with ease and naturalism. No matter how much you may come in knowing about the stories main actors, you immediately understand the relationships and shifting power dynamics. The plotting itself is light but fun and it lays the groundwork for subtle commentary about privilege and the prison industrial complex.  In that way, Walker’s greatest strength is the way his writing is just enough without overdoing it; the conversations, the character’s,  the action, the idea’s, there’s so much life to all of it but it’s never announcing itself. Walker understands what’s fun about these character’s in this setting and he uses that to craft an excellent debut. Artist Sanford Greene and colorist Lee Loughridge bring a stylistic looseness to the visual narrative of the book. Greene has a distinctive rough line that is perfect for this comic. His unique expression work expertly convey’s the books subdued complex emotional moments like when Danny is jumping at the chance to help an old friend that fell on hard time or Luke Cage is realizing how quickly the negotiations with Tombstone are deteriorating ending at this moment 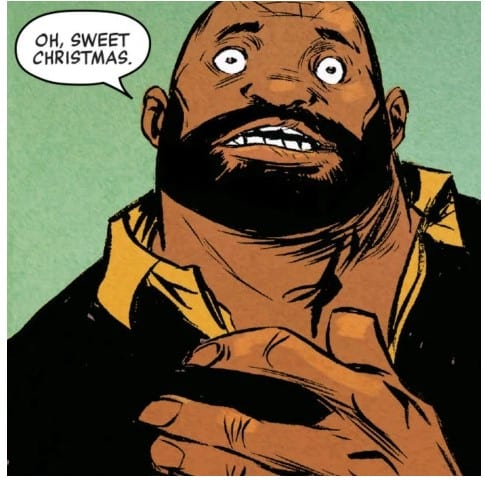 It’s this illustration that’s style is singular to Greene but instantly understandable and evocative of excitement, humor and fear all in one shot. His action is fluid and vibrant, his design work is rich and detailed, his background illustrations at a dinner are more entertaining then almost anything else I read from Marvel or DC Comics this week. Lee Loughridge coloring is bright, lively and eclectic, it establishes the books tone by capturing a pulse thematically.

Superhero or work for hire comics can be hit or miss in a lot of ways, there’s always a larger corporate interest at stake, the realities of the direct market can be brutal for non traditional styles and creators can often feel constrained by those conditions. But every once in a while, a book finds a creative pairing with a property that feels serendipitous, that manages to approach the concept in a way that’s never been done before but feel’s totally obvious; everything just feels right. That’s David Walker, Sanford Greene & Lee Loughridge on Marvel’s Power Man & Iron Fist #1, a comic that reconfigured the decades old property in a way that’s completely natural and lived in, as if this version of the comic is the one that’s always been there even though we’ve never seen a take like this before. It’s fun, it’s exciting, it’s insightful, it’s Power Man & Iron Fist; your new favorite superhero comic.