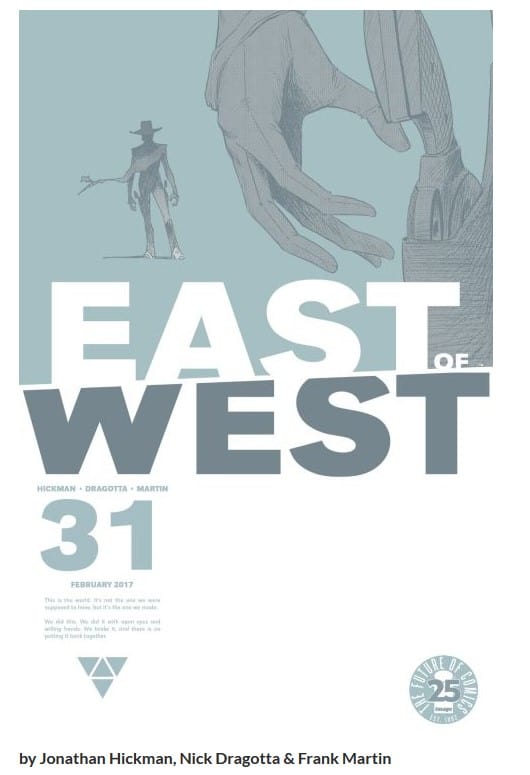 “This is how you die well…”

After almost four years and thirty one issues, East of West continues it’s mind blowing descent into the apocalypse with this weeks installment encompassing almost everything that makes the book a standout for the medium. It’s a stellar combination of heart racing action and high concept storytelling against the backdrop of it’s rich and advanced world building architecture. It’s a marvel in comics structure and execution with issue #31 being one of the high marks for the series.

“Then you have a day like this. When there’s a little order to the chaos..”

When I was an undergraduate, my favorite class was International Relations (no small wonder it ended up being my degree concentration) Much of the class was devoted to introducing general academic concepts in relation to the main subject and then using the Socratic method within the student body of the class to explore their context. At one point, when we were discussing the Hegemony theory that international relations are best when dominated by one country, the whole class came into agreement that since the Cold War, for better or worst, the United States qualified as such. I’ll never forget my professors response, I can still remember it almost word for word:

“Really? If nineteen guys can take down the entire system with box cutters, I’m not so sure”

It still blows my mind today because it completely recontextualized my idea of power. A nation state is in many ways the ultimate consolidation of power, it wields the supreme authority of it’s population while representing an incredible negotiating body in terms of trade for resources. But all that is built upon the shared belief collectively in it’s authority. On September 11th 2001, nineteen men defied that power in the most brutally violent and heinous way possible, killing almost 3,000 innocent civilians and changing the United States forever. But beyond the very obvious atrocities committed by the hijackers that day and all that’s happened in it’s aftermath in regards to US Foreign policy and our relations with the Middle East, Americans had a deeper realization that no matter how big we were or how much power we accumulated, we are always inherently vulnerable to those that refuse to recognize that power.

“I beg you do not confuse me with the politicians you are used to. I do not deal in hope”

I write all of this because it’s the central them of issue #31, the shifting nature of power in statehood and it’s inherent fragility. It’s story focuses on the Union and how the hubris of Madame President Antonie LaVey has becoming the agent of her undoing. Writer Jonathan Hickman has a brilliant structure that gives just the right amount of setup before the books action kicks into high gear racing towards the books explosive conclusion. Hickman’s overall concept is pretty obvious, that being that abuse of power comes back to that abuser tenfold but how he does it here is equal parts fascinating and exhilarating. Unlike say, issue #22, this one takes it time to give the plot and it’s cast a much richer context. This is supported by the writers eloquent dialogue that clearly surmises each actors position in the story while staying true to their characters, all while avoiding veering off the rails in exposition. And just in case that’s all sounds a little too high concept, the majority of the comic is about robbing a flying train. It’s awesome on every possible level up to it’s conclusion on a very specific 9/11 visual parallel designed to further challenge the readers allegiances and perspective, while questioning who we’re rooting for on the page and where we may actually fit into that power structure within our own lives.

“Bite down until you feel the bone”

Artist Nick Dragotta is a master in visual storytelling and issue #31 is one of his best outings yet. His art has always felt like a fusion of Katsuhiro Otomo & Moebius with a mixture of stunningly detailed design and visceral action to make for the illustrators singular aesthetic. In #31, the way he maximizes the use of panels per page while still allotting the proper spacing for detail also recalls the mastery of Steve Ditko for how it never sacrifices on scope and is laid out in precision. While the visual storytelling is certainly busy, it’s also uncluttered and efficient. Overall, these pages work perfectly, they have just enough imagery without being overwhelming.

Colorist Frank Martin masterfully captures the mood of the issue in how the bright blue hues of the train and sky contrast with one another in the action centerpiece while his more muted dark green and grey tones make the dreary cityscapes and the insides of the building that inhabit them instantly recognizable. He also maximizes the colors impact in the confined spaces of the panels, like in the page above, first panel in the second to last row of the character firing a gun. In it’s center, it’s a bright yellow but he surrounds it with a muted orange to accentuate the blast and give the panel a greater feeling fluidity. While his impact feels less prominent then other East of West issues on a surface level, there’s no grand sky lines or landscapes this time around, but the subtlety of his contribution is crucial to it’s overall effectiveness.

“Have you ever cared about something so much that you would sacrifice everything to achieve it?”

Issue #31 of East of West is a master class in comics storytelling. It’s so effective in that regard that almost anybody could pick it up and be entertained, even without the context of the entire series. The comic has reached a rarefied air where the grand tapestry of it’s history has layered the foundation for a book that can do almost anything within the confines of it’s larger world and story arc, along with a creative team aptly capable of delivering on that potential. Yet while anything can happen, the laws of nature still apply at the books core; it always bites back.

“You have earned what is coming to you”