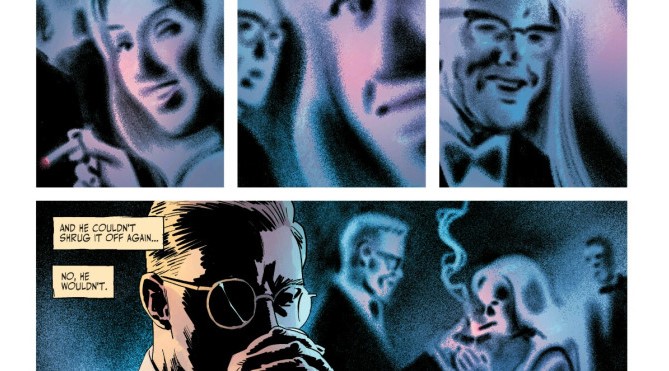 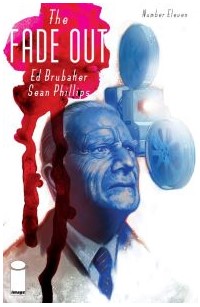 Okay, so I have 9 issues of The Fade Out piling up in my “unread” short box and a large number of Deluxe Hardcovers with the names Brubaker and Phillips on the front, which fall into the same “unread” category. That was a few months ago, when I devised a plan to not only catch up to The Fade Out but also tackle all these books on my shelf.  Some would say that this week’s finest choice was scripted that day. After two months of Brubaker and Phillips titles culminating to reading all 10 issues of The Fade Out last week I really didn’t have a choice. Maybe I didn’t have a choice, maybe I was so consumed by The Fade Out that no other masterful book out there would ever measure up. All of that doesn’t change the fact that The Fade Out #11 was the best book of the week and the trippiest issue of the series.

I wrote an article last week attempting to answer the question “Who killed Val?” I mentioned a few different names in that article but on the top of my suspect list was Charlie. I’m not sure if I am being blinded by Charlie-vision but this issue made me exponentially more suspicious of Charlie. If he didn’t kill Val he was definitely involved in some way. Charlie has been barely holding onto things this entire series and in this episode it all starts to unravel.

The issue opens a week before Val is murdered. Production has been shut down for the day because Val is a no show. Dottie makes a few comments at the beginning of this issue telling Charlie to go look for her because quote, “…she likes you, Charlie. God only knows why.” I’m suspicious of these comments from Dottie and this keeps her on my most medium suspect list. Charlie finds Val at a beach house north of Malibu. He found her in a rough state by the toilet as it appears she had been on quite the bender. Charlie nursed her back to sobriety and they discussed intimate details about their past. This “weekend getaway” clearly created a special bond between Charlie and Val. There was nothing sexual, even though she was in a vulnerable state. Charlie was just concerned about helping her out. Val opened up and vaguely explained about her terrible past as a child actor and how she was saved from that life by a kind man. She didn’t say who this man was that saved her but she did say something that rang in both my ears and Charlie’s, “The past is a knife“. Charlie and Val snuggle, fully clothed “Like little kids trying to sleep through a thunderstorm“. There is something about this image that stayed in my mind. The way Charlie is describing Val in these scenes and the way Val looks at Charlie as she explains being saved by a kind man. This creates the feeling that Charlie and Val have a long history, not just the history of meeting on set of this movie.

The scene then cuts to Charlie talking with Gil in a diner. Charlie is explaining the conspiracy that links Val, Kamp and Drake in some triangle of blackmail. His arguments seem thin and he appears to be grasping at straws. I start to think it might be my Charlie blinders that are making me distrust his logic, but I am pleased when Gil, the crazy schemer himself, thinks that Charlie is a little too convinced of this conspiracy. The diner scene reaffirms to me that Charlie is trying too hard to make the connections, perhaps because deep down,  he knows he was involved in Val’s murder.

Charlie and Gil travel to Kamp’s ranch, in hopes to get the old man drunk and have him spill the beans about Drake, Val and the whole conspiracy. This is where things get crazy. As they sneak through Kamp’s dark house Charlie gets a memory, a memory from his blackout. It is a memory of Drake talking to him in a kitchen. Only there is something very familiar about this conversation. I really get the feeling of deja vu,and seeing as I just read all 10 issues I know I have read this scene before. As I quickly pull a random issue out of my long box, issue #7, I open it up to search for the scene where Charlie talks to Drake in the bathroom. Sure enough, it is in that issue and what do you know? The conversation Drake and Charlie had the night Val was murdered is the exact same conversation, word for word that he had with Drake in the bathroom of the bar after getting beat up. This confirms that the bathroom scene didn’t happen, it was in Charlie’s mind. In Charlie’s memory of chatting with Drake in the kitchen, Val is there and she is telling Drake not to mess with Charlie. What is going on?!?!

Even though I have given a few spoilers for this issue, I will keep the “Oh shit” moment for you to find out. This issue definitely ends with a bang, making it almost unbearable to wait for the series finale.

I can’t tell you to go buy The Fade Out #11 because it would be silly to jump into this book with only one issue remaining. Go back to the beginning and read it all, you definitely want to find out the answer to the big question next month.

… one more thing. Flip to the back cover of the book. There is a picture of Flapjack in “The Krazy Kids Christmas Carol”. Val was in the Krazy Kids as well, I can see her in the photo. But who is the kid with the glasses… and why is another kid pointing at him? It is geographically impossible for this to be Charlie but I’m still starting to think Charlie doesn’t just black out when he is drinking.