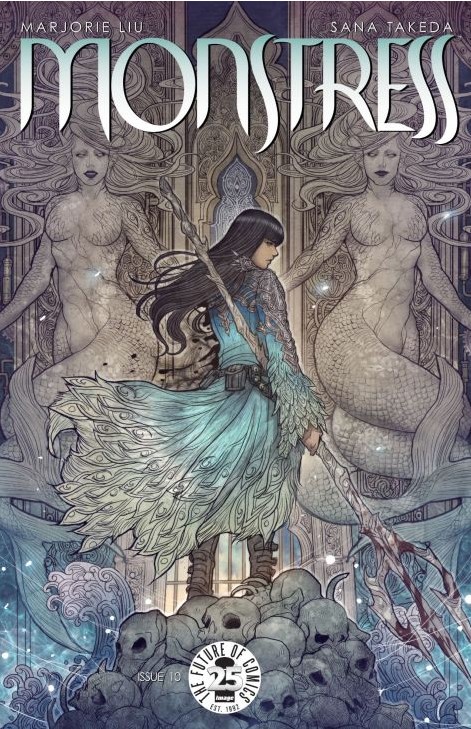 As with any art form, the best comic books are those that offer an immersive experience. Favorite paintings or films, for example, provide visual worlds for contemplation, while listeners can lose themselves within an album’s aural landscapes. All these mediums share the ability to craft a compelling ambiance. The same is true of Monstress which continues its excellent run this week with another stunning issue.

Much of the appeal of Monstress is related to its elaborate world building. The narrative unfolds in the aftermath of a long brutal war waged between magical/semi-magical beings. This extended conflict, which continues to simmer not far below the surface, has left the environment ravaged. A general sense of gloom hangs over the proceedings, a visual reminder of writer Marjorie Liu’s motif of war’s deep, ill-healing scars. Issue #10 however, achieves a heightened level of dread as protagonist Maika and her companions reach the Isle of Bones.

Maika is on a journey of a deeply personal nature. She has a literal demon within her, the Monstrum. This vicious creature is part of the legacy from Maika’s mother, Moriko. Moriko was an accomplished, adventurous woman, who also left behind a trail of secrets her daughter is desperate to understand better. Maika’s quest elaborates on Liu’s theme of war’s long shadow, illustrating how the bloody past is never far from our precarious present. Maika is driven forward in her desire to better understand the past so that it might shed light on her own present self. Maika is her mother’s daughter: resolute and determined to uncover the knowledge she seeks. That commitment has now brought her to the Isle of Bones.

The issue opens with Maika and her two companions (Kippa and Ren) in a small boat nearing the island. The air is thick with spirits evocatively rendered by artist Sana Takeda. The page is defined by the grey tones of the spirits, their wafting forms dominating the space. Their sorrowful expressions plead pity more poignantly than any words. It is a striking image which immediately sets an ethereal tone for the following pages. As the spirits crowd closer together, mermaids appear, demanding that Maika abandon her journey to the Isle, who are soon overwhelmed by the emergence of sea ghouls. Where the spirits were merely haunting, the ghouls are terrifying. Their skin is a sickly, pale sea hue suggesting life within the deep has robbed them of warmth. Their gaze is blank, their concentration fixed solely on securing nourishment. They burst from the depths without warning, ripping into the mermaids’ flesh with a chilling efficiency. It is an unsettling sequence which ends with the arrival of another fantastical creature: a skeleton ferryman, guiding a boat with glowing eyes and a gaping frown of a mouth.

Visual wonders run throughout the issue as Maika, Kippa and Ren explore the island. Takeda excels at not only the broad strokes of beauty, but the more subtle detail work as well. A forest is full of small creatures apprehensively following Maika’s approach. Eyes glow within trees. This illustrative motif repeats at the end of the issue where the introduction of an imposing character is contrasted with tiny creatures humorously flaring about the background. Most importantly, though, Takeda continues to also excel at facial expressions from Kippa’s wide-eyed concern to Ren’s priggish sense of authority.

Through it all, Maika remains confident. She has seen many sights by this point, some harrowing, some fantastic and many both. She remains a survivor. Liu may be scripting a narrative rooted in the horrors of warfare, yet she is also telling a tale of healing. Knowledge may not cure all torments, but it can provide some solace. In Monstress, Liu and Takeda continue to investigate this concept while offering readers a deeply immersive reading experience. And for that reason, it is This Week’s Finest.